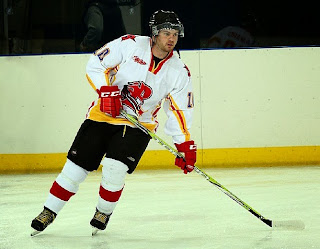 Billingham Stars bid to keep their NIHL1 North title challenge on track as they host Sutton Sting on Sunday.

The Moralee Conference leaders are on a five-game winning run in the league, but forward Scott Ward thinks Sting will be difficult opponents: “With every team strengthening the standard has got better and you need at least three solid lines with lots of talent just to be in with a shout.

“Sutton are a bit of a unknown after their bad start, but they seemed to turn things round last week. With the attacking talent they have and the addition of Adam Robinson they’re a team we’ll be taking very seriously. Our home form is crucial if we are going to push for the title.”

Second placed Whitley welcome Manchester Minotaurs to Hillheads on Sunday. Warriors blew a 5-2 lead to draw at Sutton last week and forward Jamie Tinsley is keen to get back to winning ways: “I think we’ve had a good start to the season, with a few results we haven’t deserved after the effort we put in.

“This weekend is a big game as we dropped a point the last time we played them. After a hard week of training from everyone I’m confident we can get the win. As far as the rest of the season, I expect us to be battling for the top spot with most of the league as it’s going to be tight this year.”

The remaining NIHL1 games see Telford Titans face Solway Sharks on Saturday, before a trip to Blackburn Hawks the following evening. Solway are at Sheffield Spartans on Sunday.

The top four in NIHL2 (Laidler Conference) are all in action on Sunday. Leaders Deeside Dragons travel to title rivals Nottingham Lions, fourth-placed Solihull Barons are at Sheffield Senators, while Coventry Blaze will look to keep a grip on second as they host Widnes Wild.

Forward Dale Buckland is pleased with the start Blaze have made this season: “Things have been good so far. A lot of teams wrote us off before the season had even begun due to who had moved, but we’ve gelled better than anyone could have imagined.

“We’ve got a great bunch of guys, we’re well drilled and we have depth. Sunday is all about the win. Do the little things right, make smart plays, keep our zone clear and put the puck in the net.”

Tipped by many as Conference favourites, Barons have made an indifferent start to the season, but defenseman Eddie Slater believes things are looking up: “The defeats at Nottingham and Deeside hurt as we know we didn’t capitalise on our chances. We know we haven’t played our best hockey yet, but it’s a long season and you can’t predict the outcome of any games.

“At the start of the year we put a lot of pressure on ourselves, but we’re more relaxed now and I’m sure this will help our performances. Sheffield can be a tricky team to play at home but I’m sure we’ll leave with two points.”

There is one other Laidler Conference game on Saturday as Blackburn Eagles face-off against Hull Jets.