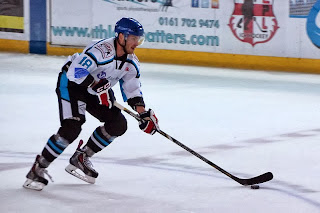 Solway Sharks face a tricky weekend as they look to defend their NIHL North league and cup titles. Sharks host Sutton Sting in the KD Flavell & Sons Northern Cup on Saturday, before a trip to Blackburn Hawks in the league on Sunday.

Defenseman Juraj Senko (left) thinks they’re more than capable of collecting two wins: “It seems most of the games will be close this season, so we have to approach every game very seriously.

“We have a tough weekend as Sutton played very well against us last week, while Blackburn started the season in excellent form. I believe if we give a team performance we can win both matches.”

Sutton are in league action on Sunday as they travel to Whitley Warriors. Expected by many to be in the hunt for honours, Sting have won just once this season, but defender Scott Glover believes it’s only a matter of time before things turn around: “It’s a tough double-header this weekend, but with some guys coming back from holiday and injuries we should be much stronger.

“We signed a lot of new players and it’s taking time for everyone to click. Even given our poor results I still feel we have one of the strongest teams in NIHL and are capable of beating anyone. It’s a tough league and I think it will go right to the end with no runaway winner.”

Sting Coach Ian Johnson has added ex-Billingham Stars forward Adam Robinson to his roster. Robinson has a trio of NIHL titles to his name and is hopeful he can help his new team to glory: “I’m looking forward to coming into a strong team and challenging for trophies. I am excited about playing with old friends like Scott, Chris Colegate and Mark Corfield again. I hope to hit the ground running and contribute to a successful season.”

Manchester Minotaurs face Telford Titans on Saturday, before a trip to Sheffield Spartans the following day and have been boosted by the return of defenseman Andy Dunn from Sutton. Dunn moved to Sting during the summer, but has rejoined Manchester after struggling to travel to the Sheffield-based outfit: “This wasn’t an easy decision to make, but due to family problems I haven’t been able to train and travelling became hard.

“I can’t speak more highly of the organisation, Ian and the guys. They’re a great bunch and I wish them all the best. Manchester are a different team from the one I left and have added more quality to the roster. I’m looking forward to getting going again.”

Nottingham Lions bid to extend their winning to five on Sunday as they host Sheffield Senators. Lions had a tough run of fixtures to start the season, but captain Luke Thomas is happy with performances so far: “We have some young guys still finding their feet and learning our style of play. We haven’t yet played a game with a full strength squad, so taking 11 out of 14 points so far, having already faced Solihull and Coventry twice, is more than we expected.

“Deeside have had the start we did last season, getting the opportunity to score plenty of goals and put some breathing space between them and the rest of the league. We know from last year how much of a boost we got when we saw the chasing pack drop points, so it’s important every time Deeside get a win, so do we.

“This weekend is yet another test, with form going out of the window in Nottingham/Sheffield derbies at any level. Everyone has the ability to win games. I was very impressed with both Hull and Widnes, while even Blackburn (Eagles) pushed us hard in the third period on the opening day of the season. This Conference is going to the wire and I fully expect things to only be finalised come the closing weekend.

“The visitors will have ex-Lions defenseman Elliot Perrin in their line up and he’s eagerly anticipating the clash: “It will be hard at Nottingham as they have a strong and skilful team. I’m looking forward to playing against my old club after what happened, as I feel I’ve a lot to prove to them.

“Sheffield welcomed me with open arms and it’s a great club to play for. I think this league is wide open and I’m confident we can have a great season.”