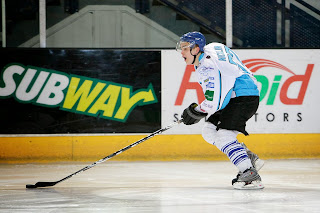 Telford Titans bid to pick up their first points of the season as they face Billingham Stars on Saturday.

Titans have endured a difficult start to their NIHL1 North (Moralee Conference) campaign, losing their first six games, but defenseman Ashley Stanton believes his younger teammates will be better for the experience.

“We stayed at the higher level to test ourselves properly. We knew we’d be up against it, but as a very young team why play average teams in a lower league if your main goal is to bring youngsters through?

“I’m not a big fan of a few teams who pay for their class instead of breeding their own. On the other hand we’ve got Billingham this week and they’re a shining example of a club who build around their local guys. I’ve played for 22 years and most of their team were there at junior level.

“With the likes of Wallace playing so well our senior players need to be on their best form. I play for the name on the front of the shirt, not the one on the back and I’ll be doing my best to provide protection for my boys even it does tarnish my name.”

Saturday’s other fixtures see Solway Sharks aiming to bounce back from last weekend’s defeat at Billingham as they welcome Sutton Sting to Dumfries, while unbeaten Blackburn Hawks travel to Sheffield Spartans. On Sunday Billingham host Blackburn in the KD Flavell & Sons Northern Cup.

NIHL2 (Laidler Conference) leaders Deeside Dragons face a weekend double-header as they look to return to winning ways. Dragons travel to Blackburn Eagles on Saturday, while Solihull Barons are the visitors to North Wales the following evening and defenseman Mike Jones says it’s a crucial weeekend.

“We started the season strongly and avoiding the big teams in the first month helped the team to gel,” said Jones. “Now we have to pick up results against those big teams, something which didn’t happen last week at Coventry. Saturday will give us the chance to blood some juniors, while the Barons game is vital as we can’t afford to lose any of our home matches.”

Coventry travel to Sheffield Senators on Sunday hoping to build on last week’s impressive result against the Dragons. Blaze have lost two of their opening six matches and forward Josh Nicklin (above) believes they need to string some wins together.

“After producing such a mixed bag of results against the top teams, it’s important for us to stay consistent if we want to challenge for the title,” said Nicklin. “Otherwise we could find ourselves with nothing to play for whatsoever. Personally I’m itching to get back out there having missed the last two weekends through injury.”

The remaining fixtures see Widnes travel to Hull Jets on Saturday, while on Sunday Wild are at Nottingham Lions.