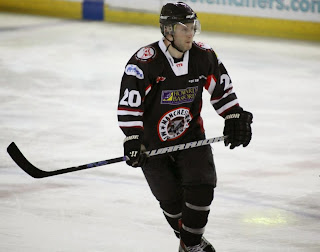 Manchester Minotaurs welcome Solway Sharks to Altrincham on Saturday looking to end a three game losing streak. Minotaurs started the NIHL North season with a win at Sutton Sting, but have since lost narrowly to Solway, Blackburn Hawks and Billingham Stars.

Despite the defeats forward Brian Worrall (left) thinks they’ve already proved their critics wrong: “We’ve had four tough games against last year’s top four and in only one of those games can I honestly say we didn’t deserve the points.

“As a unit our mindset is different to previous years as Kevin (Cassidy) has really got us playing like a team. I believe people won’t see us as the joke of the league anymore. This weekend will be tough, with Solway a very organised team, but we won’t make things easy for them and we’re certainly not thinking about losing another game in our barn.”

Sheffield Spartans host Whitley Warriors on Saturday, while the following day they face local rivals Sutton Sting. Spartans suffered two losses last weekend but defenseman Stephen Weeks feels they are capable of bouncing back: “Last week was a real learning curve for us. We were let down with penalties against Billingham, before a below par performance in Blackburn where we just couldn’t seem to get our systems working.

“Despite this I’m confident we’ll only get stronger in the coming weeks. Spartans are a massively different team to last season, with new Coach Martin White giving us a positive new direction. We’re clear about what we need to work on, where we can improve and I think over the coming weeks you’ll see us cause quite a few upsets. Whitley and Sutton are two tough opponents, but both provide the perfect opportunity for us to prove we can mix it with any team in this league.”

IN NIHL2 (Laidler Conference) bottom club Blackburn Eagles travel to unbeaten Deeside Dragons on Sunday. The Eagles have endured a miserable start to the new season losing all four games, but team boss Darren Shaw believes they can spring some surprises over the course of the season: “We knew we were in for a tough start facing Nottingham Lions, Solihull Barons and Coventry Blaze, plus a Sunday night away trip to Hull Jets. Despite the results team spirit is high.

“We have a never-say-die attitude and believe we’ll turn a few heads this year. We’ve had praise from away fans and their coaching staff and along with Head Coach Scott Barnett we have faith and confidence in this team.”

Nottingham travel to Hull on Saturday, while on Sunday they bid for revenge against last week’s conquerors Coventry.”