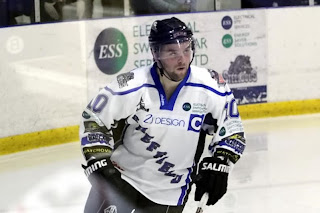 With most of the issues settled in NIHL1 North, attention this week focuses on the race for promotion from Division Two. Nottingham Lions secured the automatic slot last weekend, but just one point separates the next three teams all hoping to make the promotion play-off game.

Solihull Barons are currently second, but face the Lions in their final two fixtures. Barons are level on points with Deeside Dragons who travel to face promotion rivals Sheffield Senators on Saturday. Despite their difficult run-in, defenseman Adam Andrews believes Barons can still reach NIHL1.

“Hopefully the Sheffield result will go our way and they’ve both still got to play Hull, so maybe they’ll throw a spanner in the works. All we can do is win our last two games. We’re expecting no favours and Nottingham are worthy champions, but we’ll do whatever it takes to get the two wins as nothing less than promotion will do.”

Deeside & Sheffield met last weekend, with the Dragons claiming a 7-3 success but Senators’ captain Stephen Weeks (above) is confident of a different result on home ice.

“We were disappointed last week, but felt we showed a lot of heart and we know what we need to improve on for the return game. If we win our last two games we’re in with a fantastic shout of making second, which would be a massive achievement and an example for other teams without the financial backing others possess. We’re determined to get the job done and will show the togetherness that has got us to this point.”

Dragons have been in decent form of late, losing just twice since Christmas and boss Ian Foster thinks they can keep the run going.

“We’ve got two big games coming up which I’m confident we can take the points needed. Regardless of what Solihull do these are must-win games and if we drop any points we don’t deserve to still be in with a shot. We would have liked Nottingham to still be needing points, but we’ve not kept pace with them. I’m sure they’ll still be going all out to finish on a high and possibly have a say as to who will take the play-off spot.”

Division Two’s other fixtures are both on Sunday as Nottingham host Fylde Flyers, while Hull Stingrays meet Blackburn Eagles.

Double-winning Solway Sharks are at Sutton Sting on Sunday, looking to continue their excellent form ahead of the play-offs. Sharks are unbeaten in their last 30 games and forward Adam Reynolds is hopeful they can clinch the final trophy of the season.

“Winning the title feels great, especially when the standard’s been as high as it’s been this year. A treble would be a great achievement from everyone associated with the club, but we’ve got to get by Blackburn first. No-one will want us to sweep the season so it will be tough.”

“Hopefully we’ve gained some respect in ice hockey circles with our achievements at senior level over the last three seasons. We’re looking forward to facing Solway on Sunday and they must be really applauded for what they’ve done this year. We finish off with a couple of games against Trafford Metros, before preparing for the play-offs.”

At the bottom of the table Coventry Blaze travel to Trafford on Saturday, before returning home the following day to face Blackburn Hawks. The same day Metros are at Sheffield Spartans, while Whitley Warriors host Telford Titans.