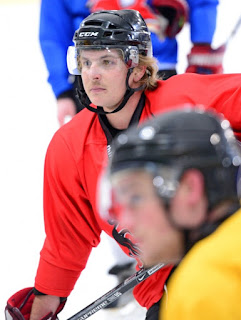 Solway Sharks are looking to clinch the first silverware of the season on Saturday, as they face Billingham Stars in the second leg of the KD Flavell Welding Specialists East/West Trophy Final. Sharks hold a 3-1 lead from the first leg, but Stars have been boosted this week by the signing of Dave Manning (left) from Adelaide Adrenaline, along with the return of forward Stephen Wallace and blue-liner Dave Thomas.

Stars’ Coach Simon Leach believes Manning can spark a Stars comeback, “He’s coming here to prove himself and has paid all his own expenses – his flight, his ITC card – so it’s a massive commitment on his part,” said Leach. “The Australian league has got better and better and they have some good players, so I’m really hopeful Dave’s arrival will be a big boost to the club.”

Both teams return to NIHL1 North action on Sunday, with Sharks travelling to Sutton Sting, while Stars host Whitley Warriors. Sutton are also in action the previous day at Coventry Blaze. Sheffield Spartans and Telford Titans face a weekend double-header with both teams aiming to improve their survival hopes.

NIHL2 North leaders Nottingham Lions will have Simon Hunt back in their line-up on Sunday as they host Solihull Barons. The Lions have games in hand over all three of their promotion rivals, including the Barons, who sit on 21 points along with Deeside Dragons and Sheffield Senators. The teams have met once so far this season, with Lions claiming a 2-1 win in Solihull.

The Dragons will look to bounce back from last week’s home defeat to the Lions as they travel to Fylde Flyers on Saturday. Player/Coach Steve Fellows was full of praise for his team’s efforts against the Lions, “In the dressing room after the game there was nothing I could say to the lads,” said Fellows. “We won that game in almost every department and on another day we’d have run away with it. Everyone of the guys did their job well, but we’ve got to put that game away now and go out and get the win at Fylde.”

Sheffield Senators are in action on Sunday as they travel to face Blackburn Eagles.