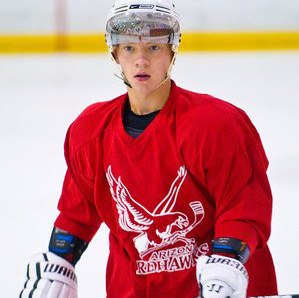 Solway Sharks welcome Blackburn Hawks to Dumfries on Saturday, looking to extend their winning run to eight games. The NIHL1 North leaders were comfortable winners at Telford Titans last week and Coach Martin Grubb believes his team can maintain their good form, “Hawks come into the game full of confidence after a great result for them in Billingham,” said Grubb. “It’ll be a tough test and we know we’ll have to be at our best, but we’ve been playing well lately and will be looking to ensure we remain top of the league.”

Hawks return home the following evening to host Billingham. The teams met last weekend at TFM Ice Arena with the visitors running out surprise 5-4 winners. New Latvian import Ivo Dimitrijevs (above) was on the scoresheet and thinks he can have a similar impact again this week, “I’m feeling more comfortable in this league and I hope more goals will come from me this weekend,” said Dimitrijevs. “I think we will have two wins if we play like last week against the Stars. We need to play smart and not take penalties.” Mark Watson will be in goal for Billingham after James Flavell’s move to the EPL’s Sheffield Steeldogs.

Josh Bruce will make his debut for Coventry Blaze against Trafford Metros on Saturday. Bruce returns to Coventry after spells in the EPL with Telford Tigers and Slough Jets. Blaze also expect to have Rikki Bryniarski back in their line-up. Whitley Warriors travel to meet the Titans but will be without Dean Holland who’s moved to Guildford Flames. Warriors host Coventry at Hillheads on Sunday, while Sutton Sting meet Sheffield Spartans.

Solihull Barons’ NIHL2 North promotion hopes have received a massive boost with the signing of Joe Henry from Telford Tigers. Henry ices for the first time this Sunday at home to Sheffield Senators. Barons have also released forwards Dale Buckland and Ryan James, but defenseman Lee Winwood has returned to the club. Nottingham Lions face Blackburn Eagles and will have Canadian Jose Leon in their squad for the first time after his switch from Geneve-Servette in Switzerland. The previous evening Hull Stingrays travel to meet the Senators.