ENL1 North’s end of season play-offs take centre stage this weekend, with the first semi-final between Whitley Warriors and Blackburn Hawks being played.

The pair will do battle for the right to face league champions Billingham Stars or Telford Titans in the final and all four teams are eagerly anticipating the traditional end of season shoot-out.

Billingham ended the regular season on top of the pile though they were pushed all the way by reigning champions Whitley. Stars began the season in fine form before suffering a blip just after Christmas, but they finished strongly to claim a deserved title. Coach Stephen Foster acknowledged the play-offs would be a different challenge to their league campaign.

“The league took us 32 games to win, while the play-offs will be much more intense over just four games,” said Foster. “We have the harder of the games at Telford as they’re the highest scoring team in the league. I think having home advantage first could be a big influence on the play-offs and Telford are a very tough prospect on home ice.” 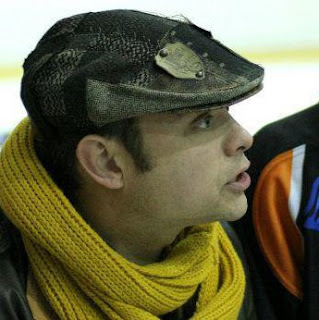 Titans have been the surprise package in ENL1 North after only just avoiding relegation last term. New coach Paul Shuttleworth (left) has done an excellent job in transforming his team into genuine play-off contenders, but was quick to praise the efforts of his players, “I’m so proud of what they’ve done. When I took over at the start of the season I asked them what their goal was and they said the play-offs. We’ve achieved that by reducing penalty minutes and playing as a team.”

Blackburn’s third place finish is their best for a number of years and, but for a poor start to the campaign, they may have pushed Stars for the title. Just three defeats since the turn of the year has left team boss Graham Lomax believing Hawks can clinch their first ever silverware, “We’ve had a few injuries at the latter end of the season, but if we get everyone fit I’m convinced we’ve the playing staff to win this thing.” Player/coach Jared Owen (below) agreed, “They’re always good close games against Whitley and we’ll need to be on top of our game. If we do that I’m confident we can progress into the final.” 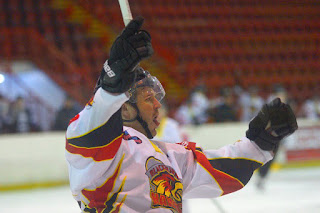 Hawks have faced Whitley six times this season – with three wins each – but Warriors’ coach Garry Dowd is certain his team can claim their third play-off title on the spin, “I really fancy our chances,” said Dowd. “Play-off hockey is tougher than the league and it really suits us. Blackburn will be hard as they really turned up the heat after Christmas, but if we stay focussed and disciplined we can make the final.”

If Warriors get past Hawks, Dowd knows who he wants in the final, “Stars! A North-East derby would be the ideal final. We haven’t managed to beat them this season, so to do it and win the play-offs would be brilliant.”

Hawks and Warriors’ first leg will face-off on Saturday 31st March at 5.45 pm at Blackburn Arena, with the return at Hillheads, Whitley Bay the following evening at 5.00pm. Stars and Titans are due to meet over the Easter weekend.

(Graham Lomax interview with Chris Holdsworth from The Bee: http://soundcloud.com/mjblack-1/hawks-play-off-interview)