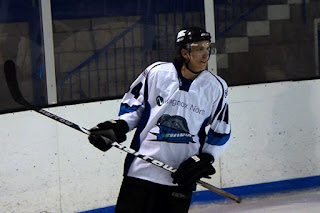 Newly promoted Solway Sharks have announced their first signings in their quest to put together a squad capable of mounting a serious title challenge. Sharks’ coach Martin Grubb has welcomed back record breaking top scorer Adam Reynolds (left) and long serving captain Mark Gallagher as the club prepares for life in NIHL1.

Grubb was delighted the pair agreed to return saying, “Adam and Mark are two players I spoke to well before the season finished and along with a few others I identified them as key signings. I’ve been working hard on securing the services of the players we want and when you look at what these players give us it’s clear why we wanted to retain them.”

Reynolds bagged an impressive 54 goals & 73 assists as Sharks were promoted last season with a perfect record, while Gallagher weighed in with 31 goals & 72 assists.

Former Blackburn Hawks star Rick Bentham has left Peterborough Phantoms to return to the North West but is thought to favour remaining in the EPL.

Champions Billingham Stars have been quiet so far losing Andy Fletcher to retirement, while Dave Thomas could be doubtful to return due to work commitments. Whitley Warriors defender Andrew Cook has announced he won’t be returning to Hillheads and long serving Nottingham Lions forward Chris Colegate has retired.