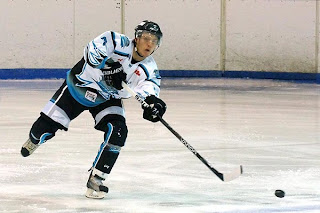 Solway Sharks have confirmed the signings of Craig Mitchell and Mark Gallagher. Mitchell (left) had originally agreed to sign for Braehead Clan, but a new career opportunity meant he was unable to commit to the Elite League schedule.

He returns to Dumfries as Assistant Player/Coach leaving Head Coach Marting Grubb delighted: “This move has happened very quickly and when Craig advised me of his career opportunity and desire to continue playing, I was only too happy to bring him back to the club. I’ve kept in contact with Craig all summer and I know he was looking forward to getting back to Elite level, however his long-term career is more important than the short time he can play professional hockey. Craig is one of the most professional players I’ve dealt with and I’m delighted he also expressed an interest in coaching as this will fit nicely with my GB commitments.”

Mitchell was pleased with his new role: “At this stage of my life signing for the Sharks is the perfect fit for me. It’s a club I trust and one I loved playing for last season. The staff and players are fantastic and this creates a great platform for success. We delivered trophies last season and under the guidance of Martin we hope to maintain our winning tradition. I’m excited to take the first steps into coaching by assisting and learning from him.”

Club captain Gallagher has spent his entire career in Dumfries, but had been unsure whether to commit to another season. Grubb was relieved to finally add him to his roster again: “Mark is one of the first players I try to sign every year as he is the natural leader of our team. It has taken a little longer to persuade him to return, but I believe the decision to come back is one we will both benefit from. He is one of the hardest working players in the league and has proven over the years that he can form a partnership with anyone and help them contribute to the team. I was always desperate to sign Mark as we would hugely miss what he brings and he will be as important as ever this year.”

Sheffield Spartans captain Ollie Barron has resolved his differences with the club and will play in Saturday’s pre-season friendly against the EPL’s Sheffield Steeldogs. Barron quit Spartans following a dispute with Sheffield Academy, but Barron confirmed to C2C the matter was now closed and he thanked Head Coach Martin White for supporting him.

Nottingham Lions have snapped up Robert Perks and Connor McNaughton from Solihull Barons ahead of the friendly charity game against their West Midlands rivals at Hobs Moat Road on Sunday. The game is in aid of Cure Lukaemia for Kids.