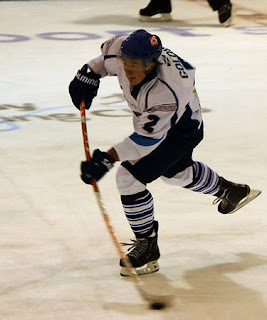 Solway Sharks have pulled off a major coup ahead of the new NIHL season with the signing of Frazer Goldie from Edinburgh Capitals.

Goldie previously played for Solway before going on to feature in over 50 Elite League games for the Capitals and will be expected to play a big role this season.

Head Coach Martin Grubb was delighted with the signing: “Frazer is a big solid defenseman who is very good in his own zone and competes for every puck. I’ve been talking to him for quite a while with a view to him returning and he will add a lot of size, ability and experience to our line up. I know what I’m getting with Frazer and I’ve always liked his attitude and competitive nature and he’ll be a good addition to both us and the league.”

Billingham Stars pair Andy Finn and Callum West have agreed another year, while Garry Dowd and Anthony Price return to the club from Whitley Warriors. As first rumoured by C2C, Trafford Metros have completed the signing of Brian Worrall from Deeside Dragons.

Telford Titans forward Dan Gadsden has agreed a third year with the club, while youngsters George Cox, Conor Gordon and Oliver Hunt will all feature in NIHL this season. Titans have also confirmed first year U18s Ben Washburn, Matt Price and Jo Aston will be eligible to play at senior level. Matty Compton and Dave Costelloe have signed for another year with Deeside.