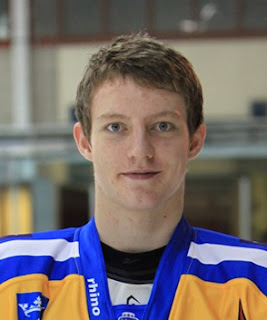 Solway Sharks have confirmed the signing of Craig Mitchell from the Elite League’s Dundee Stars. The defenseman came through Fife’s junior system before going onto play for Fife Flyers. He then moved to Edinburgh Capitals, followed by a spell with Hull Stingrays before moving back to Scotland with the Stars. Mitchell (left) has also represented GB at U18 & U20 level.

The signing represents a major coup for the Sharks and Mitchell is eager to make an impression, “I’m delighted to be signing for the Sharks and hope to help them build on what was a fantastic season last year,” said Mitchell. “Martin (Grubb) was very instrumental in my junior days at Fife and helped me develop. I know he’ll demand the very best from this team and me throughout the season.”

Grubb was delighted with his latest signing and said, “When I knew there was a chance to sign Craig, it was something we just had to try and do. He’s exactly the type of player we want here. He reads the game well, is calm under pressure and will play a huge role for us this year. Along with John Connolly it shows the calibre of player we’re trying to sign.”

Blackburn Hawks Coach Jared Owen has added two players to his roster ahead of their season opener against Sheffield Spartans on Sunday. Forward Jordan Bannon returns after an impressive first season with the club and is joined by defenseman Chris Butler, who is back after a long spell out through injury.

Owen was delighted to secure the pair, “Jordan’s a real offensive dynamo and scored some big goals for us last year,” said Owen. “He’s a very talented player who could do a job in the EPL if given the opportunity. Chris has been out for a while, but when he came back on the ice in the summer it didn’t look like he’d been away.” It was initially thought Bannon wouldn’t play this season due to work commitments and Owen did admit this may affect the number of games he’ll be able to play.

Coast to Coast can also reveal the Hawks are expecting a Latvian trialist, who has played in the USA, to try out with the club next week. Owen is also hopeful of registering a third new player in time for Sunday’s game.