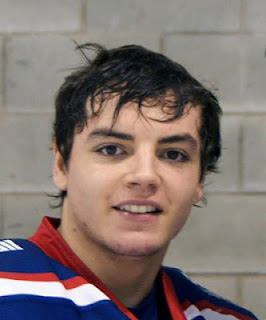 Solway Sharks have snapped up netminder Mark McGill from Dundee Stars. The 21-year-old came through the Murrayfield junior development system and has represented Scotland under Sharks Coach Martin Grubb.

“I’m delighted to have signed a quality goalie in Mark for the season ahead,” said Grubb. “I’ve always placed tremendous importance in strong goaltending and in Mark we have a goalie who is desperate to play and to win games. He has improved with his time in the Elite League, but now is the time for his to step up and play a big part in our team’s success. We’ll have a strong goaltending team and Mark knows he’ll be expected to help us push for honours in NIHL1 North again.”

Nottingham Lions have confirmed Joe Wightman has agreed another year with the club. Wightman topped the Lions scoring charts last year with 26 goals and 29 assists and Coach Matt Bradbury was in no doubt how important an addition he is to the team: “It’s fantastic news to welcome Joe back for 2013-2014,” said Bradbury. “Last season he was definitely the most valuable and consistent player – his attitude is second to none and he is a true role model with so much experience to pass onto the younger players coming through the ranks.”