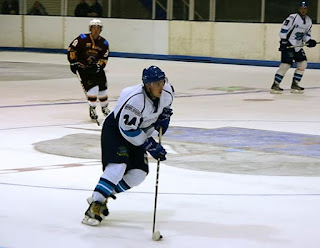 Solway Sharks have added three GB youth internationals to their roster as Coach Martin Grubb continues to prepare for the season ahead. Forward Aidan Fulton (left) returns to Dumfries after signing a two-way deal with the Elite League’s Braehead Clan, and he’ll be joined by defensemen James Wallace & Declan Balmer.

Grubb was delighted with his latest trio of signings, “Aidan’s an undoubted talent who I really enjoyed working with last year,” said Grubb. “It was a fantastic move for him to go full-time to the Clan for the second part of last season and hopefully he’ll be able to make the step-up again. He skates well, has good vision and an eye for goal and will play a big part for us this season. James and Declan have been on my radar for a while and I expect we’ll be able to utilise their understanding of each other as they make the step up to senior hockey.” Netminder Gary Russell has also signed two-way terms with the Clan.

Sheffield Spartans have snapped up Nick Whyatt following his controversial release by Nottingham Lions last week. Spartans’ Coach Chris Wilcox moved quickly to get Whyatt on board: “When we learned there was an opportunity to sign Nick, we didn’t hesitate in making contact and explaining what the Spartans are about,” said Wilcox. “I’ve played against Nick on numerous occasions and he’s someone I’ve admired – a strong tough player who can play forward or defense. He’s one you’d want on your team because he’s very difficult to play against.”