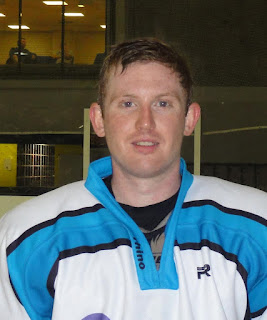 Solway Sharks have confirmed the signings of John Connolly and Daniel Murdy. Connolly (left) started last season in the EPL with Slough Jets, followed by a brief stint with Manchester Phoenix before moving to MHC Kazakhmys in Kazakhstan. The former GB U20 international has also featured in the Elite League with Braehead Clan & Edinburgh Capitals.

Sharks’ Coach Martin Grubb was delighted to welcome Connolly to Dumfries, “I’ve been chasing John for a number of years,” said Grubb. “He’s got great experience both at home and abroad and will be a massive player for us this season.”

Ex-Whitley Warriors forward Murdy joins Sharks after a year in NIHL1 South with Wightlink Raiders and is hopeful his new team will have a successful season, “I’ve heard excellent things about the club from Adam Reynolds & Nathan Salem,” said Murdy. “I know Martin’s been working hard to put together a solid team to challenge for honours and it’s exciting to join a club which has high expectations of itself.”

Netminder Josh Nicholls has confirmed his return to Coventry Blaze. Nicholls enjoyed two excellent seasons with Blaze before moving to the EPL with Telford Tigers. Coach Reg Wilcox was glad to welcome Nicholls back, “We really missed his presence in the room last year,” said Wilcox. “Josh is a player who puts his heart into every game and takes every slip personally.”

In addition to securing Nicholls to his roster, Wilcox has added another five players with forwards Philip Pollok & Connor Hubbuck agreeing to return once again, while defenseman Dale White has joined from Solihull Barons. Jake Larkin makes the step up from the Blaze U18s and ex-Sheffield junior Josh Gent completes the quintet. Ex-Blaze forward Ian Hunt and Sheffield Senators netminder David Roxburgh are understood to be on their way to Solihull. Blaze have also confirmed they’ll travel to face the Barons in a pre-season challenge match in aid of the Help for Heroes Charity on Saturday, August 18th (face-off 5pm).

Sutton Sting Coach Ian Johnson has secured another big coup for the NIHL1 North newboys with the capture of ex-EPL defenseman Ryan Johnson. The 28-year old has also featured for Edinburgh & Sheffield Steelers in the Elite League and will link up at Sting with a familiar face, “Ryan will bring some much needed strength and experience to our defense,” said Johnson. “Having played many seasons previously alongside James Goodman at Sheffield Scimitars, I really can’t wait to see them back on the ice together.”

Johnson also confirmed forwards Ben Lowe & Shaun Ashton and defenseman Thomas Jeffrey had agreed another year with the club. Sting have also announced a North v South pre-season challenge game against Chelmsford Chieftains. They’ll travel south for the away leg on August 25th, with the return at Ice Sheffield on September 1st. The games will see Chieftains ice their new Slovakian import Julius Sinkovic, who’s moved to Essex from EA Schongau in Germany.

Trafford Metros have made their first player announcements of the summer, with experienced defenseman Simon Mills, forward Jamie Rogerson & netminder Tom McDonald agreeing another year at Altrincham. James Udell has become the latest member of Billingham Stars’ double winning squad to commit to another campaign.