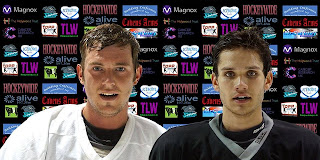 Sharks Coach Martin Grubb was delighted to add the pair to his roster: “I’m confident they will both become fans’ favourites with the skills and style they’ll bring to the team. Iain is an exciting signing as he’s a highly skilled forward with the ability to bring something completely different. I’ve known Iain for years and always enjoyed coaching him and I know he’s desperate to show everyone what he can do, and I believe he’ll be a standout player once he gets his match fitness back.”

Thurston is a product of the Newcastle junior system and moves to Dumfires after a breakout season in NIHL1 North for Sting in 2012/13. Grubb said: “Craig is a young player I like – he has great speed and intensity and I already have a specific spot in the line-up pencilled in for him. He’s an ambitious young man with the attributes and work rate to succeed, and I hope to be able to enhance his skills to allow him to flourish with the Sharks. Both Iain and Craig are good offensive players, bringing different skill sets to the team and will become extremely valuable to us this season.”