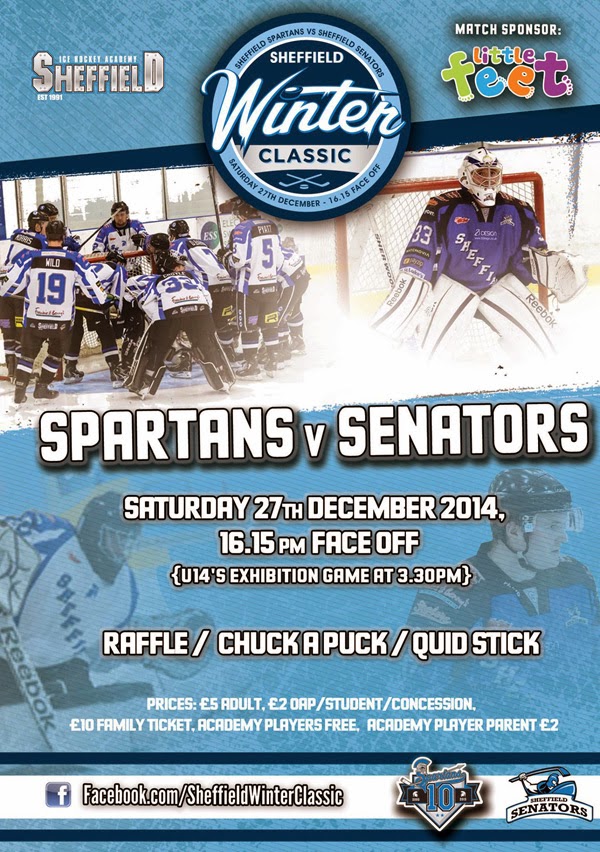 Sheffield is set to host its first Winter Classic as the Spartans and Senators battle for NIHL North bragging rights.

This will be the very first competitive game between the two Sheffield Ice Hockey Academy (SIHA) senior teams, but organisers hope to make it an annual Christmas event.

Moralee D1 outfit Spartans are in their 10th season in NIHL and have enjoyed their fair share of success during that time. The current squad feature a number of familiar names in Sheffield ice hockey circles including Stuart Brittle, Nick Manning and Ollie & Will Barron.

Senators were formed in 2010 and are currently pushing for promotion from Laidler D2. Some of the present day Spartans passed through the Senators’ ranks before moving up.

SIHA Chairman Joe Walker said: “This Winter Classic is a first for the club’s two senior teams, but it has the makings of a good competitive clash and one I hope the fans of both teams look forward to watching.

“It will be played in the right spirit and the teams will put on a game to remember. They say Christmas is a time for giving – well that’s what is in store from both teams as they will be giving their all in the Sheffield Winter Classic.”

A specially-designed Spartans/Senators hockey shirt, signed by all the players, is just one of the raffle prizes on offer at the event, which also features an U14 exhibition game.