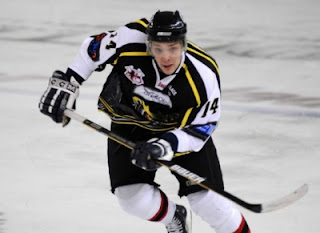 Billingham Stars have confirmed the signing of Stephen Wallace from Manchester Phoenix. The forward returns to the North East after spells with Phoenix, Bracknell Bees & Sheffield Scimitars. Wallace (left) scored 139 goals with 127 assists during his seven years in the EPL and represents a major coup for the 2011/12 double winners.

Netminder James Flavell has also returned for another season with the club. Flavell posted a 93.6% save average last season as Stars finished with the best defensive record in NIHL1 North. Wallace and Flavell will be joined by influential defender Richie Thornton and captain Paul Windridge who’ve agreed a further year at Billingham Arena. Stars are also hoping to confirm a pre-season game in early September with the EPL’s Sheffield Steeldogs.

Coventry Blaze have made their first signings of the summer. Forward Rikki Bryniarski returns for a sixth season with the club, while youngsters Rhys Gillatt and Danny Barker make a permanent step up from the juniors.

The situation at Blackburn Hawks remains unclear following a management meeting this week. Rumours had surfaced that team boss Jim Pennycook was unhappy about a number of issues, though the club denied this. A Hawks’ spokesman confirmed the meeting had “gone well” and said another was scheduled for this week where he expected the team’s plans for the coming season to be finalised.