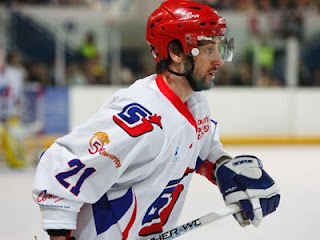 Billingham Stars have completed the signing of Andy Munroe from Bracknell Bees. The talented defenseman has played over 400 EPL games and represents a major coup for Stars as they bid to regain their NIHL North crown from Solway Sharks.

Munroe (left) was part of Peterborough Phantoms treble-winning squad in 2008/09, before claiming Play-off and Cup winners medals with Slough Jets in the following two years. He rejoins former Bees teammate Michael Bowman in the North East.

Stars General Manager Allen Flavell was delighted to agree terms with Munroe: “We needed to tighten up at the back. Ross Hanlon was a big unexpected loss, but in Andy I’m sure we’ve found a mature level-headed defender who’ll bring a wealth of experience to our squad.” Flavell also confirmed defenseman Dave Thomas will play this season when work commitments allow.

Jay McFadyen and Adam Alfoldy are back for another season with Coventry Blaze, while Deeside trio Kenny Williams, Ed Begley and Gavin Austin all return for the Dragons. Jamie and Tom Hovell have agreed a second season with Nottingham Lions.