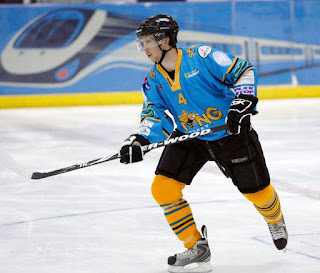 Sutton Sting have added two more to their roster as they continue to build for the new season. Andy Dunn has joined from Trafford Metros, while Simon Butterworth (left) returns for his fourth year with the club.

Sting boss Ian Johnson was delighted to secure the pair: “Andy brings exactly what we need to strengthen our defence,” said Johnson. “He has size, a good understanding of the game and is happy to join the rush offensively. However, his biggest strength is he knows exactly what a coach wants out of a defenseman.”

Dunn joins Sting after a difficult year in Altrincham which saw the Metros relegated from NIHL1 North: “I’m looking forward to a new challenge with Sutton,” said Dunn. “I’ve been in talks with Ian for a year about signing and once this season ended, I felt it was the right time to make the move across the Pennines. With the majority of players staying I can’t think of a better side on paper to sign for. I’m really looking forward to playing under Ian and helping the lads deliver even more. Sting have achieved massively in such a short time and I hope it continues.”

Butterworth’s return sees him reunited on the Sting top line with Jamie Spurr and Chris Sykes: “Having these three together from the start of the season is a massive boost,” said Johnson. “I thought Simon might have hung them up this summer due to family commitments, but he’s told me he feels we have some unfinished business to sort.”

Sykes was confirmed last week and Johnson feels he could be the key to a title challenge: “Chris joined us late in the season, but soon posted an average of three points per game and pushed his way up the stats tables. As we entered the run-in he contracted glandular fever and then a swollen spleen which put him out and boy did we miss him. He made a cameo appearance at home against Solway which almost killed him and then laced them up for the second leg of the play-off semi-final, but I knew he should have rested. A few weeks later he’s 100% and back on the ice. He’s a massive signing for us.”

Solway Sharks’ top scorer Nathan Salem has moved up to the EPL with Telford Tigers. Salem will be a tough act to follow after notching over 100 goals in his two seasons with the Dumfries outfit.

Coventry Blaze Coach Reg Wilcox has retired – James Pease is understood to be in line to take over. Blaze have confirmed forward Gareth Owen and netminder Josh Nicholls are leaving the club – with Nicholls believed to be on his way to Solihull. The Barons have already snapped up another Blaze man, with Kieran Papps agreeing a move to Hobs Moat Road.

Widnes Wild have made their first signings ahead of their debut NIHL2 North season. Forward Bobby Caunce has joined from Fylde Flyers, while ex-Deeside Dragons defender Calum Ruddick returns to the ice after a spell away from the game. Ken Armstrong, Stewart Marriott & Richard Charles have also been confirmed to the Wild roster.