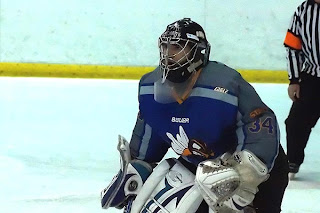 Dmitri Zimozdra (left), James Goodman and Simon Offord have all agreed their return to Sutton Sting for season 2013/14.

After finishing third in their first year in NIHL1 North, Sting Coach Ian Johnson was keen to lay early foundations for another successful campaign: “Dimi brought a professionalism last season which I hadn’t witnessed before and it was essential we maintained our strength at the back,” said Johnson. “Goody is one of the best ‘D’ men in the league. He has a wealth of experience and brings along his passion to every practice and game. Offord reads the game well, has size and is a great skater. Most of all his hands are amazing for such a big guy, especially in front of the netminder on the powerplay.”

Offord was delighted to return for his fourth season with the club: “It’s been a roller-coaster since signing at the Sting and one I’ve thoroughly enjoyed. We have a very tight locker room and everyone is enjoying what we’re trying to do. Last season flew by and with Dimi on board we’ll be a strong force straight from the off next season.”

Solihull Barons have secured the signing of Josh Bruce from Coventry Blaze. Last season Bruce iced for Blaze in the Elite League and NIHL1, and Barons’ Coach Darren Bellerby was understandably delighted to get the Scot on board: “I’ve known Josh for a long time and coached him back when he was in the Under-19s at Coventry,” said Bellerby. “It’s a big signing for us. He had an offer to go back to Coventry and there were a few EPL teams also showing a lot of interest.” Barons have also confirmed Eddie & Richard Slater and Rob Eley have agreed another season with the club.

Solway Sharks defenseman Declan Balmer has moved to the EPL with Peterborough Phantoms, while Bracknell Bees defenseman Andy Munroe is believed to be wanted by Billingham. However, the Stars face competition for his signature from Sheffield Steeldogs. Ex-Blackburn Hawks defender Michael Alexander is on his way back to the UK after a successful season in Canada. Alexander was part of the Bradford Rattlers GMHL squad who enjoyed an unbeaten regular campaign, before lifting the post-season Russell Cup. Trafford Metros have appointed Kevin Cassidy as their new Head Coach.