Sutton Sting have appointed Matt Darlow as their new Head Coach. Darlow previously coached in the ENL with Sheffield Spartans and the EPL’s Sheffield Steeldogs and he takes over from Ian Johnson who steps down after five years in the role.

C2C spoke to Darlow about his appointment: “I’m very proud to be Sutton Sting Head Coach for the coming NIHL North season and excited to be back involved in the sport I love thanks to Ian and Gary (Apsley).

“This is a period of transition with several very good players leaving the club and my initial focus is on recruiting smartly to ensure we get the right players brought in to fill the big skates left behind. I wish everyone leaving Sutton the very best for their future and thank them for their contribution to the continued growth of the team.

“I aim to build a team who can be competitive and believe to do that we have to keep the core of the returning players invigorated and enjoying their hockey while developing some of the younger guys to push them. It certainly helps that I have very strong connections with a lot of the players and I have a great amount of respect for them all.

“It’s been a while since I’ve been in the hot seat and I relish the challenge given to me. This is a great opportunity for me and one I’m extremely happy has come along.”

Johnson remains with the club, but says the time was right to hand over the coaching reins: “I found it increasingly difficult to see myself coaching at senior level for another term. Sting mean everything to me and it’s really important we maintain a senior team going forward to ensure we have opportunities for our junior players to progress.

“This season will be tough, probably more so for us as we’re looking at quite a few guys leaving the sport. Our appointment of the right Head Coach was essential if we’re to maintain competitiveness and development at all levels.

“I’d like to thank my players, supporters and off-ice officials who’ve supported me over the last five years with the senior team and wish Matt all the best for the new season. He has a wealth of knowledge, both at senior and junior levels, and some excellent coaching credentials and achievements. I know he’s the kind of guy we can work with to improve the team.” 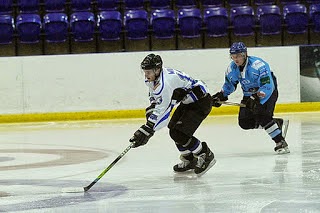 Sheffield Spartans have made their first signing of the summer with Shaun Wild (right) agreeing to return to NIHL North. Wild spent last season with NIHL1S outfit Invicta Dynamos, notching 13 goals and 18 assists in 32 league games.

NIHL1 South champions Chelmsford Chieftains have appointed Dwayne Newman as their new Head Coach. Wightlink Raiders have signed import Jaroslav Cesky. The Czech forward has a wealth of EPL experience and featured in the Elite League last season with Edinburgh and Cardiff Devils.

Defenseman Chris Cooke has agreed a full contract with Invicta after spending last year on a two-way deal with the Dynamos and the EPL’s Guildford Flames.