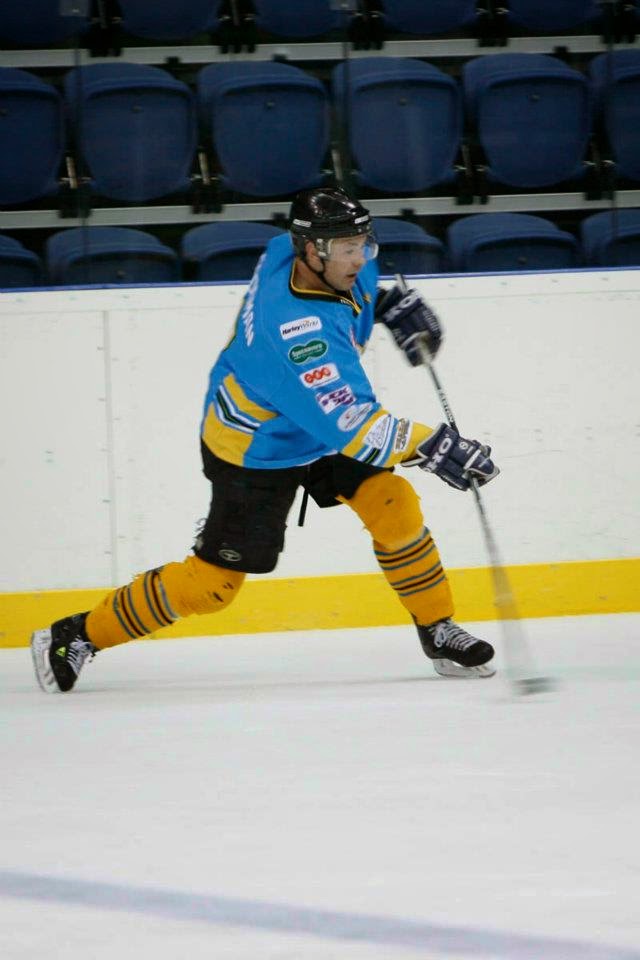 Sutton Sting have confirmed captain James Goodman has agreed another season with the club.

Goodman (left) brings a wealth of experience to the Sting roster having played over 200 EPL games for Sheffield Scimitars/Steeldogs, before going on to make in excess of 100 appearances for the NIHL Moralee D1 outfit.

The 34-year-old admitted he’s delighted to be back for another year: “I’m really looking forward to my fourth season at Sutton Sting, and although we’ll be missing a few familiar faces from last year it will enable more players from our junior system to progress into the senior squad for training and hopefully some games.

“I came here to win things and also to help progress the club and I’m hoping this season will be a big step towards achieving both.”

Sting boss Matt Darlow is a former teammate of Goodman’s and says he’s happy to have him on board: “Having played with and coached him before I know exactly what I’m getting. The tenacity and drive he brings to our unit will be immense and his hockey skills speak for themselves.

“He was unlucky to begin last season injured and it’s no surprise to see the squad struggled without him. I’ve said for years he’s one of the most underrated players I’ve played with, coached and watched and I stand by that assessment 100%. He’s a wonderful signing for our organisation.”

Billingham Stars’ influential D-man Richie Thornton is back for another season with the Teessiders. Now part of the Stars coaching team, the 31-year-old has been patrolling the Billingham blue line on and off since his junior days. Thornton played at the highest level of British ice hockey with Newcastle Vipers, and has also enjoyed spells with a number of other teams including Isle of Wight Raiders & Whitley Warriors.

Solihull Barons have made their first signings of the summer, with forwards Joe Henry & Connor Hubbuck agreeing another season with last season’s Laidler Conference double winners. Chris Preston and Daniel Bracegirdle are back for a second year with Widnes Wild.

In NIHL South, Invicta Dynamos have signed ex-Great Britain international Greg Chambers from Sheffield Steeldogs. The Toronto-born forward moves to Kent as Player/Assistant Coach after a successful career in the Elite League & EPL where he averaged over a point per game from nearly 500 appearances.

Wightlink Raiders have snapped up forward Ryan Webb from Slough, while the Jets have confirmed Zoran Kozic and Graham Bellamy to their roster once again. Mike Hargreaves has agreed a sixth season with Bristol Pitbulls.