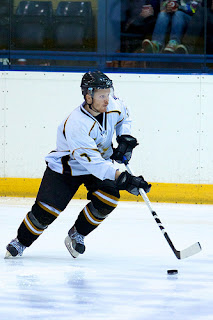 After over a decade with the Nottingham club Colegate (left) decided not to play last season, but has been coaxed back onto the ice by Sting boss Ian Johnson: “I was approached by Ian a couple of seasons ago and I really didn’t give it too much thought as I needed a break,” said Colegate. “Ian has always respected this, but kept in touch with me in case I changed my mind. I feel the time is right to get back into NIHL1 North and from what I’ve seen and heard Sting are a club wanting to go places.”

Johnson has also confirmed Neil Hardy and Andy McEwan are back for another season. Hardy managed just a handful of games last term, having returned to the ice after a six year absence, while McEwan joined Sting after a spell in the RAF.

“Neil picked up where he left off many years ago when he left the Sheffield Scimitars and I hope we can get him fit and available for more games this season,” said Johnson. “McEwan is without doubt someone to watch this season. He’s a unit and has skills beyond what he showed last year. I expect a lot from him this time around.”

McEwan admitted he was delighted to sign again: “I’d been playing rec hockey due to work and the step up to NIHL1 was an eye-opener. There are some tremendous players on this team and I’m hoping we can win the league and go further in the play-offs.”

As first rumoured by C2C, Coventry Blaze have appointed James Pease as their new Head Coach. Solway Sharks netminder Gary Russell has signed for another season, though work commitments will reduce his availability.

In NIHL2 North Deeside Dragons have signed forward Chris Jones from Telford Titans, while captain Marc Lovell has agreed another year. Luke Thomas is back for his second season as Nottingham captain. Solihull Barons have confirmed Charlie and Sam Hammerton to their roster.

Wightlink Raiders pair Richard Facey and Craig Tribe have agreed another year with the NIHL1 South outfit. However, Alex Murray has left to join Solent & Gosport Devils. Shaun Wild has joined Invicta Dynamos from Sheffield Steeldogs, while Chelmsford netminders Ben Clements and Ryan Bainborough are back for another year with the Chieftains. Import Julius Sinkovic has left Chelmsford and is believed to be on his way to the EPL.