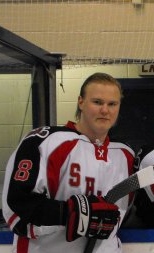 The 24-year-old was previously with Tamworth Cyclones and South Muskoka Shield in Canada’s GMHL, before moving back home to play in Sweden. During his time in Canada, Söderberg-Andersson twice reached the Russell Cup Play-off Finals – claiming a winners medal in 2009 – and also appeared twice in the GMHL All-Star game.

The Swede spoke exclusively to C2C about the move: “I’m very excited about going to the UK and play for Deeside. I’ve been close to coming over to play for a couple of years and everything has finally come together. It will be a fun experience and I’m looking forward to getting the season started. Last year I played a few games for Malungs IF in Sweden after battling injuries for two seasons, but I’m finally healthy again. Deeside look like a great team to play for, so I hope I’ll do well and help them to success.”

Dragons have also confirmed Simon Furnival, Mike Jones and Matt Wainwright have all agreed another year, while Geraint Lewis moves up from rec hockey for the first time.

Tom Pease has returned to Coventry Blaze after a year away from the game. Joining Pease will be Ashton Jenion, but Rhys McWilliams has left to join Solihull Barons. Defenseman Graig Wallis along with forwards Reece Glossop, Joseph Steeples and Christy Johnson-Brown have all agreed a further season with Nottingham Lions.

Thornton also confessed he was unhappy with the new NIHL conference structure: “I don’t think it’s the best idea ever, but credit to the likes of Telford, Trafford and Sheffield who have stuck with the higher level – well done to them for committing to our league. One of the issues of no relegation could be that come the deciding games, a team attempting to secure one of the four play-off slots could come up against one struggling at the bottom of the table. However, because there’s no threat of relegation is the lower team going to put in as strong an effort as if they’d been battling to survive? I’m not convinced.”

Sheffield Spartans have confirmed Scott Morris and Alex Harding to their roster for another year. Spartans also face a pre-season charity game on Saturday 3rd August against Sheffield Senators. Face-off will be 5.30pm with admission £3 for adults and £1.50 for under 18s. All profits go to St Luke’s Hospice, Sheffield.

Trafford Metros netminder Shannon Long has moved to NIHL1 South with Bracknell Hornets. Invicta Dynamos have signed Elliot Knell from EPL’s Telford Tigers, while London Raiders have added returnees JJ McGrath and Grant Taylor to their roster. Dominic Hopkins is back for another year with Streatham and the Redskins have also snapped up Jack Tarczycki from the Dynamos.