It’s a big weekend for all manner of reasons, none more so than GB taking their first steps in the Winter Olympic qualifiers for Beijing 2022, but at the foot of the Elite League table, a huge couple of days is in prospect.

As the weeks and months have gone, we’ve seen four teams end up in a scrap for the last couple of spots in the play-offs and it’s a battle that’s sure to intensify over the coming weeks as the fixtures run out.

But who can rise above the dreaded black line and take a place in the end of season show and consign the bottom two to a summer of misery?

The three Scottish clubs – Glasgow Clan, Dundee Stars and Fife Flyers – along with Manchester Storm find themselves embroiled in a dogfight that’s sure to go the distance as they look to get the points on the board that will see them over the line.

In arguably one of the most competitive Elite League campaigns for years, we’re really seeing something quite intriguing down the bottom end and it’s hard to call exactly who will be the happier of the bottom four.

As things stand, the situation is looking bleak for Fife Flyers, with 25 points on the board and without a win in 14, equalling a club EIHL record from their first campaign back in 2011.

They are seven points behind Dundee, above them in ninth and eight behind Manchester, who are in the utopia of the play-off spots.  You’re looking at them going on a run of wins to even get close, let along make it.

The form over the last five months suggests that’s not going to happen and with only one point to show for their last 14, the Flyers look like missing the boat.

Dundee Stars are taking points and while they remain on the outside, are worrying the teams just above them.  In their last 13 games, they’ve won eight of them and are making inroads.

Defeating Glasgow Clan on penalty shots was another significant marker as Omar Pacha looks to reach the last eight for the first time since he went to Scotland almost three years ago.

A point above them with a game in hand are Manchester Storm and again another side that have picked up big points in unlikely places, but doing enough to keep their noses in front. 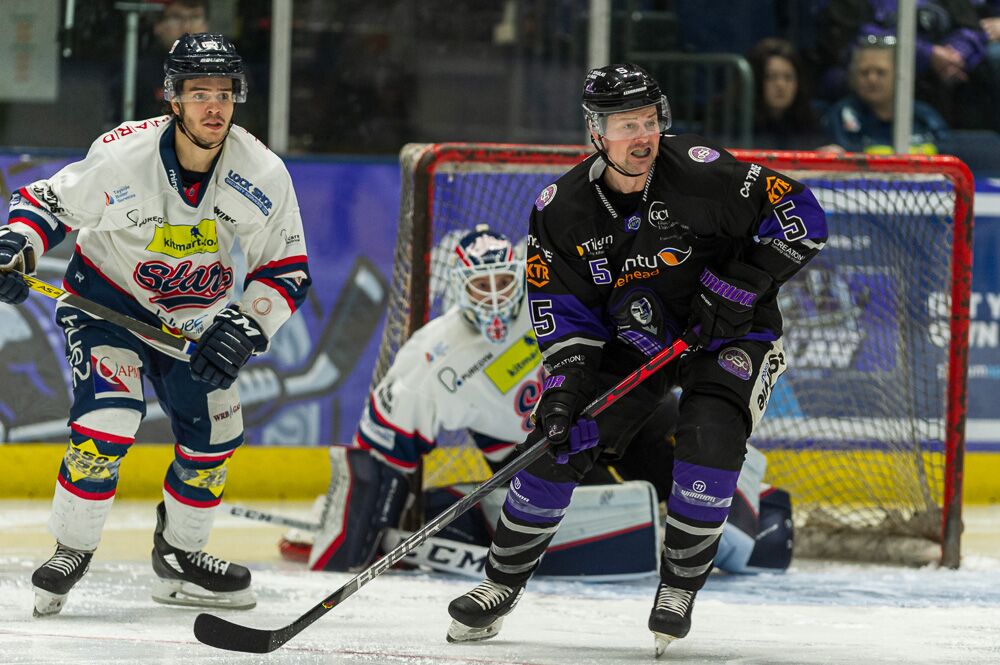 Last week’s shutout win over Dundee gave them an edge and a point from the weekend just kept them in front of the Stars and February will be an interesting month for them, with six of their nine games to come against the three Scottish sides.

Then there’s Glasgow Clan, who started the season so well under Zack Fitzgerald and the combination of injuries to key players and bad form that left them in this position.

They have an advantage, but a penalty shots loss to Dundee on Saturday means they have to beat Storm on Saturday in their only game of the weekend.

With the other teams higher up all taking a weekend off, focus will be on how this play-off battle plays out and it will be interesting to see where we’ll stand by next Monday.

As they are, four could be three soon enough and from then on, it really go down to the wire.  Don’t take your eyes off it for a second.

In recent years, this Great Britain side under Pete Russell has taken the team and the nation to great new heights in the World Championships. And what a ride it’s been.

Later this week, it’s the beginning of a new campaign, with qualification for the Winter Olympics in Beijing the target for GB, along with Estonia, Romania and Hungary when they all meet in Nottingham.

The motto for this team has been to ‘dare to dream’ and it’s certainly more positive than the unofficial “we’re s*** and we know we are’ they jokingly took on after surviving in a cutthroat World Championship campaign last year.

But daring to dream is certainly a great attitude if they can reach their first games since St Moritz in Switzerland in 1948.  My goodness, think of how good that will be.

Of course this is just the first hurdle and another qualification group awaits in August, if Pete Russell and his team get by this one.

So best of luck to Pete and all the players in what could be another big week for British Ice Hockey.

The Monday After: A Lord for the New Year’s Honours

A Lord for the New Year Honours Give a take a game or few, we’re approximately halfway through the season and I’ve got my coach of the year picked out already. To be clear, this [Read more…]

Pacha: Payback over Giants would be ideal

Dundee Stars coach Omar Pacha says he would love payback over Belfast Giants – but is taking a more measured view ahead of their rematch. They meet in Dundee on Wednesday in the live television [Read more…]