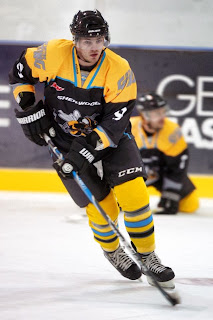 Following last year’s third place finish in NIHL1 North, Sutton Sting made a huge statement of intent during the summer with some impressive signings.

Top of the pile was Canadian forward Thomas Stuart-Dant who arrived in the UK with an impressive CV. Coast to Coast spoke with Thomas to find out about his journey to the British game:

C2C – Tell us how you got into hockey?

TSD – Ever since I was just a little kid I remember growing in a home where everything revolved around hockey, so as I got older it naturally made sense that I played.

C2C – You played in the KJHL in Canada and in the FHL in the USA. Tell us about the leagues and teams over there?

TSD – The KJHL was based in Manitoba, my home Province, where I played for Selkirk Fishermen, while the FHL is in North Eastern United States and I iced for a couple of different teams there. They were both tough leagues – fast paced and hard hitting. The only difference between the two leagues was the experience of the players.

C2C – How does NIHL North compare?

C2C – Apart from hockey, why have you come to the UK?

TSD – My mother’s side of the family is originally from England, so I’ve always wanted to come and see my heritage for myself.

C2C – How are you settling in at Sutton?

TSD – Everyone in the Sting organisation has really welcomed me with open arms and made me feel not only part of the team, but almost kind of like a children’s hero. It’s pretty surreal actually!

C2C – How do you relax away from hockey?

TSD – When I’m not at the rink, I like relaxing by sleeping in, going to the gym, enjoying a round of golf and even fishing. Relaxing with my friends is probably my favourite thing to do though.

C2C – Who is your hockey idol?

TSD – Joe Sakic, the “King of the wrist shot”. The Colorado Avalanche are my favourite hockey team and I followed them after they moved from Quebec during the nineties. Joe was the captain up until he retired.

C2C – What are your personal ambitions in hockey?

TSD – I would like to play at the highest I can for as long as possible – whether that be for Sting or if I make into the AHL or even the NHL. Money is not a factor, I just love the game.

C2C – Sting have started slowly this year. Do you think you can still have a successful season?

TSD – I have no doubt in my mind we will be successful, even with the slow start. We have proven we can compete with the teams who are out in front right now and we’re finally gelling as a unit, which can only prove positive for the future.

C2C – Which players on the Sting roster have impressed you most and why?

TSD – Everyone on the team brings a different skill set and different qualities to the team, and everyone seems to know their role – whether they score, hit or stop the puck. I think my fellow import (Vjaceslavs Movko) has really shown what he can do in recent weeks. It’s taken him a bit of time to settle, but Slav has finally become comfortable around the rest of the guys and the team that’s closer as friends, is a team to be feared on the ice.