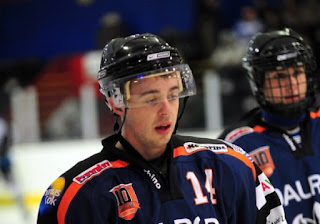 Sutton Sting have announced another trio of returnees as they continue to build for the 2013/14 NIHL1 North season.

Forwards Jamie Spurr & Chris Sykes and defenseman Ryan Johnson have all agreed another year with the club as Sting look to improve on last year’s third placed finish.

Spurr joined Sting last summer after spells in the EPL with Manchester Phoenix & Peterborough Phantoms and Coach Ian Johnson was delighted to have him back: “Spurr is an all round winger who packs a punch for his size,” said Johnson. “He’s great in front of the net and has a nose for goal. His fitness levels and technical ability also enable him to deliver excellent execution as a two-way player.”

Although keen to test himself higher up the scale, Spurr admitted he was pleased to re-sign: “I’m just happy to be around the Sting and the guys who support it,” said Spurr. “Our Coach works hard with everyone and everything is such a buzz. It’s more than hockey at Sting and long may it continue. I was gutted at being knocked out of the play-offs by Billingham but what a game to be a part of. The standard in this league has been exceptional and I like many more at Sutton have loved it.”

Spurr re-joins his line-mate Chris Sykes for next season, while Johnson remains hopeful Simon Butterworth will also agree to return.

Sting’s third signing is defender Ryan Johnson. The ex-Phoenix man enjoyed an impressive debut year with Sting – bagging 14 goals with 23 assists. Ian Johnson was full of praise for his namesake: “He’s got loads of talent, he’s tough, but most of all he’s a true leader. When we signed him last year I didn’t know how things would pan out, but Jonno was more of a player than I gave him credit for and he’s got to be one of the best ‘D’ men in this league.”

In NIHL1 South Wightlink have confirmed Nathan Taylor has signed for a fourth year, while the Raiders are understood to be interested in Invicta forward Nat Rose. Dynamos have already been dealt a blow as defenseman Tim Smith announced he is leaving the club after six years. A return to the EPL with Sheffield Steeldogs is on the cards.