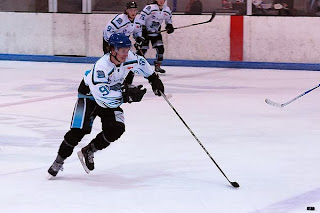 Solway Sharks moved to the top of NIHL1 North (Moralee Conference) after a four-point weekend. Two goals each for Juraj Senko & Ross Murray (left) helped them to an 8-0 win at home to Sheffield Spartans and they followed up with a 7-5 success at Whitley Warriors – Murray (2) & Struan Tonnar (2) led the scoring.

EPL leaders Manchester Phoenix won 4-3 at Slough Jets – Frantisek Bakrlik grabbed the overtime decider – and they followed up with a 6-4 win at home to Sheffield Steeldogs. Guildford Flames secured a pair of wins in their weekend double-header against Swindon Wildcats, winning 5-2 on the road and 6-3 back on home ice.

Basingstoke Bison lost 4-3 after a shoot-out at home to Bracknell Bees and completed a miserable weekend with another 4-3 reverse at MK Lightning. Shaun Thompson scored three in Bracknell’s 5-3 win at home to Telford Tigers. Peterborough won 6-3 at Telford Tigers – Erik Piatak hit a hat-trick – but slipped to a 5-3 loss at home to Slough. Two Lubomir Korhon goals helped Sheffield to a 3-0 success over MK Lightning.

Belfast still lead the Elite League after a pair of hard fought road wins. The Giants battled to a 2-0 victory at Hull Stingrays and followed up with a 4-2 success at Sheffield Steelers. Nottingham Panthers lost 4-2 at Fife Flyers and 7-6 after overtime at Edinburgh Capitals.