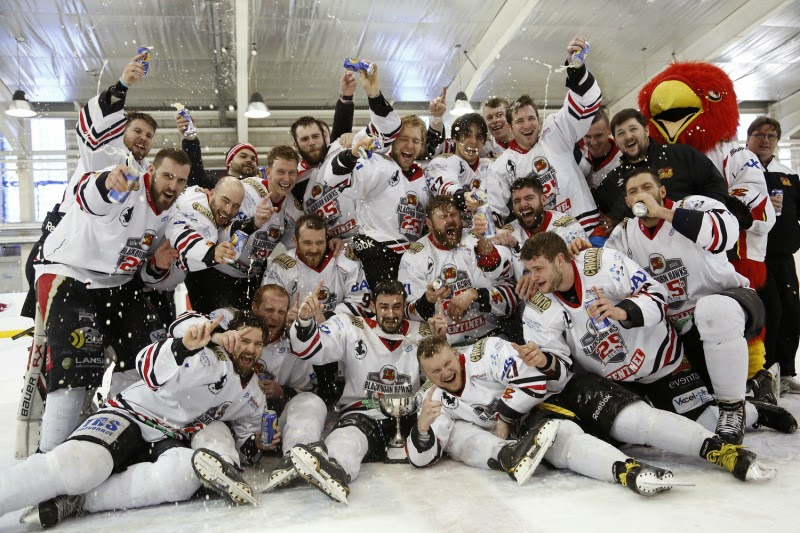 The reigning league champions found Sheffield Spartans a tough nut to crack in their semi-final, but eventually opened up a two goal lead.

Spartans tied things up at 2-2, before goals by Aaron Davies and Luke Brittle sent Hawks through.

Billingham Stars and Solway Sharks produced a goal-fest in their semi-final. The Teessiders progressed courtesy of a 9-6 victory – Chris Sykes and James Moss both hit hat-tricks.

The final was an end-to-end affair, with Stars going ahead in the first through Michael Elder before Luke Brittle drew Hawks level. Davies put Hawks in front in the middle period, but Stars bounced back early in the third to take the lead though Paul Windridge and Elder.

Hawks refused to lie down, with Davies and Brittle each adding their second of the game before Tom King and Jordan Bannon wrapped up a 6-3 win.

Whitley Warriors retained their D1 status with two comfortable play-off victories against Laidler D2 outfit Widnes Wild. Warriors won 9-3 on the road and followed up with an 11-2 success on home ice.

Slough Jets wrapped up their NIHL2S regular season campaign with a 12-3 win at home to Chelmsford Warriors. Bristol Pitbulls triumphed 5-3 on home ice against Wightlink Tigers and Basingstoke Buffalo won 6-3 at Cardiff NIHL2.

Slough now face Basingstoke and Bristol meet Peterborough Islanders, with the winners of each tie playing off for promotion to NIHL1S.

Kirkcaldy Kestrels added the SNL play-off crown to their regular season title after a 4-2 win against Edinburgh Capitals.