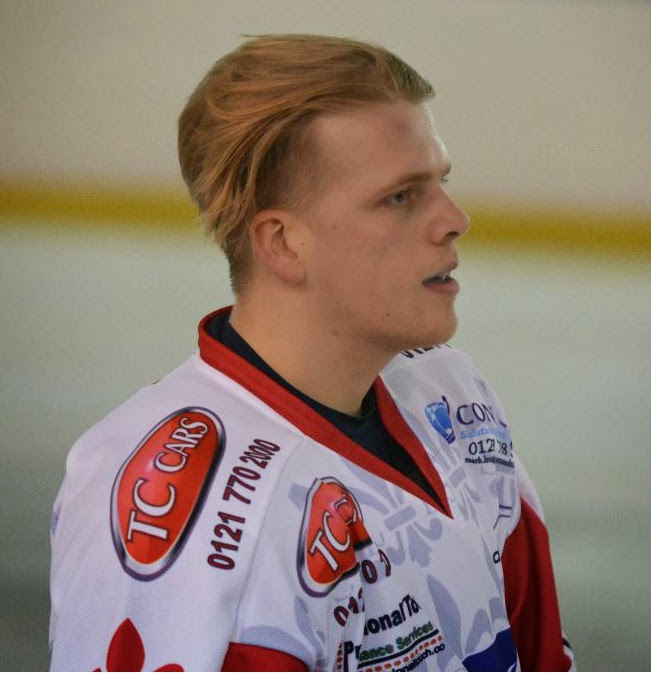 Whitley Warriors and Billingham Stars shared the spoils after their first NIHL North Moralee D1 derby of the season ended in a disappointing 1-1 draw.

Josh Hay (3) led the scoring for Solway Sharks as they won 15-1 at home to Manchester Minotaurs.

Laidler D2 leaders Solihull Barons maintained their 100% record, but only after an almighty scare at Telford Tigers NIHL. The hosts led 3-1 early in the final period, but Barons fought back to secure a 4-3 victory – Thomas Soar (above) scored the winner. Barons found things more comfortable back on home ice, winning 16-2 against Coventry Blaze.

Nottingham Lions triumphed 12-4 at Bradford Bulldogs – Slav Kasprzak grabbed a hat-trick – but a James Smith goal 50 seconds from time condemned them to a 2-1 loss at home to Telford. Sergevs Jegorovs scored three for Sheffield Senators in their 6-3 success at Hull Jets. Deeside Dragons won 11-0 at home to Bradford – Si Furnival (2) & Jack Meadows (2) were amongst the scorers.

Invicta Dynamos are up to second in NIHL1 South after a four-point weekend. Steve Osman’s late empty netter capped a 3-1 home win against Wightlink Raiders and Dynamos followed up with a 4-1 success at MK Thunder.

In NIHL2S, Lee Valley Lions had a tough time one home ice losing 6-1 to Chelmsford Warriors and 4-1 to Peterborough Islanders. Conor Pollard hit a hat-trick for Peterborough in their 10-2 D2 Cup game against Swindon Wildcats NIHL.

EPL leaders Telford Tigers slipped to a 5-4 defeat at Swindon Wildcats, but bounced back in style with a 4-1 victory on home ice against Guildford Flames. Tomas Malasinski scored three for Swindon in their 11-3 success at MK Lightning. Basingstoke Bison had a miserable weekend, losing 2-1 at MK Lightning and 7-3 at Sheffield Steeldogs.

Sheffield Steelers lead the Elite League after picking up a pair of victories. They won 4-1 at home to Cardiff Devils and followed up with a 4-2 road success at Coventry Blaze. Belfast Giants slipped to a 3-2 loss at Hull Stingrays, but recovered to secure an impressive 6-3 win at Nottingham Panthers.

Braehead Clan had a mixed weekend on the road. They cruised to an 8-2 success at Fife Flyers, but failed to follow up as they lost 6-5 after overtime at Cardiff. Jade Portwood grabbed the decider in Edinburgh Capitals’ 3-2 win at home to Coventry.

Ned Lukacevic hit the winner for Fife in their 6-5 shoot-out victory at Edinburgh. Dundee Stars won 2-1 after overtime against Hull. Nottingham won 7-2 at Fife in the quarter-final first leg of the Elite Challenge Cup.

Great Britain U20 secured promotion back to World Championship Division 1B with a clean sweep of victories in Estonia. GB defeated Netherlands, Lithuania and Romania, before a 5-4 shoot-out win against Korea clinched the gold medal. They completed a successful week with a 3-1 win against the hosts.