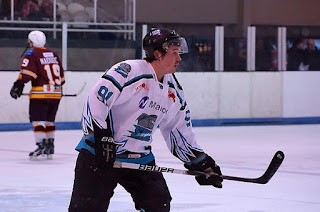 Solway Sharks have opened up a four point lead at the top of NIHL1 North after taking maximum points over the weekend. Nathan Salem (left) hit a hat-trick as Sharks came from 3-1 down to win 4-3 at Coventry Blaze, and they followed up with a 3-1 success at Telford Titans.

Stephen Wallace, James Moss and Michael Bowman were on target as Billingham Stars won 3-2 at Blackburn Hawks. Whitley’s Tom Ralph grabbed a late winner as the Warriors recovered from 4-2 down to beat Coventry 5-4. Trafford Metros kept their faint survival hopes alive with a 4-4 draw at home to Telford.

Sheffield Senators are the new leaders of NIHL2 North. Tom Humphries scored six in their 12-1 win at Fylde Flyers, while Nathan Britton’s hat-trick helped them to a 4-2 win at home to Solihull Barons. Jordan Bannon (6) & Brian Worrall (4) led the scoring as Deeside Dragons crushed Blackburn Eagles 19-3. Nottingham Lions returned to winning ways with a 6-0 success at Hull Stingrays – Gareth O’Flaherty scored a couple.

Chelmsford moved to the top of NIHL1 South after a 12-0 home win against Solent & Gosport Devils – Gary Clarke (2) & Tibor Schneider led Chieftains’ scoring. Romford Raiders won 4-2 at Bracknell Hornets, but their title hopes suffered a blow with a 7-5 loss at home to Invicta – Callum Fowler scored four for the Dynamos. In the NIHL South Cup, Wightlink Raiders won 9-5 at home to Streatham Redskins.

Guildford Flames enjoyed a four-point weekend to move to the top of the EPL. David Savage hit the overtime winner as Flames beat Bracknell Bees 7-6, and they followed up with a 4-2 win at Manchester Phoenix. Former leaders Basingstoke slipped to a 7-6 shoot-out loss at Slough Jets – Darius Pliskauskas got the winner – and Bison’s misery was completed with a 3-1 home defeat to MK Lightning.

Swindon’s Henri Sandvik hit a hat-trick as the Wildcats downed Slough 8-5 and they completed a successful week with a 5-2 win at Peterborough Phantoms – Aaron Nell bagged a brace. Ondrej Lauko scored three in Phantoms’ 3-1 win at home to Telford Tigers, and added another couple in their 5-2 win in the reverse fixture. Bracknell’s Shaun Thompson scored three in the Bees’ 6-3 win at home to Telford. Sheffield won 2-1 at MK Lightning – Ben Morgan hit Steeldogs’ winner in overtime – but they fell by the same score at home to Slough – Frantisek Bakrlik hit both for the Jets.

Nottingham Panthers still lead the Elite League after a pair of wins. Brandon Benedict’s hat-trick helped them to a 7-3 win at home to Braehead Clan, and they followed up by beating Fife Flyers 5-3. Sheffield Steelers are now second after a successful six-point week. They won 2-1 at Cardiff Devils, before returning to home ice to defeat Fife 3-0 and Hull Stingrays 4-0. Belfast Giants slipped to a shock 5-2 loss to home to Coventry, but gained revenge in style with an 8-2 win over Blaze.