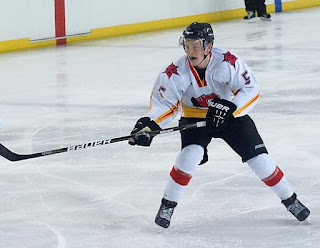 Sheffield Senators moved up to third in NIHL2 North after a successful weekend. They came from behind to beat Deeside Dragons 5-4 on home ice – Tom Humphries scored twice – and followed up with an 11-3 win at Hull Stingrays – Humphries & Nathan Britton both hit hat-tricks.

Basingstoke Bison still lead the EPL after picking up two more wins. Jaroslav Cesky scored two in their 3-1 win at Bracknell Bees and they followed up with a 5-3 success at home to Sheffield Steeldogs – Greg Chambers & Greg Owen both scored twice. Manchester Phoenix won 4-1 at MK Lightning – Michal Psurny (2) & James Archer (2) got the goals – and made it a four-point weekend with a 5-4 overtime win at home to Swindon Wildcats – Luke Boothroyd hit the winner.

Guildford Flames won 5-3 at Slough Jets – David Longstaff scored two – and followed up with a 6-3 in the return on home ice. Peterborough Phantoms won 4-3 after a shoot-out at Swindon – Tom Carlon got the winner – but blew a 4-0 lead at home to Bracknell to lose 5-4 – Marcel Petran & Lukas Smital both scored two for the Bees. Sheffield beat Telford 2-1 and the Tigers completed a miserable weekend with a 3-1 defeat at home to MK Lightning.