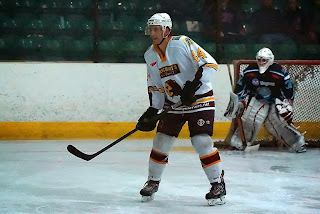 Reigning NIHL1 North double-winners Solway Sharks cranked up the defence of their titles with two impressive performances this weekend. Iain Bowie scored twice in their 5-2 win over Sutton Sting in the KD Flavell & Sons Northern Cup, while Juraj Senko hit the winner in a 2-1 Moralee Conference success at Blackburn Hawks.

Whitley came from behind to beat Sutton 4-3 – Warriors’ Adam Reynolds (left) scored twice. Lukas Zeman (5) led the scoring for Manchester in their 16-3 win over Telford Titans, and the Czech forward followed up with four more in Minotaurs’ 6-5 loss at Sheffield – Ollie Barron (2) & Scott Morris (2) were amongst Spartans’ scorers.

Chelmsford Chieftains are the new leaders of NIHL1 South. Darren Brown’s hat-trick helped them to a 5-2 win at Bracknell Hornets and they followed up with a 4-0 victory over Solent & Gosport Devils. London Raiders lost 4-1 at Cardiff Devils, but they bounced back with a 2-1 win over Streatham Redskins. In the NIHL South Cup Invicta Dynamos enjoyed double success over Wightlink Raiders – Juraj Huska scoring four in a 7-1 road victory, while Andy Smith hit a hat-trick in an 8-3 success on home ice.

EPL leaders Manchester Phoenix crashed to successive defeats for the first time this season, losing 4-2 at Basingstoke Bison and 5-4 after a shoot-out at home to Telford Tigers. Bison secured a second victory winning 5-2 at Bracknell Bees. Guildford Flames won 6-2 at Telford, but missed the chance to go top with a 6-3 home defeat to Slough. The win completed a four-point weekend for Jets as they also beat Peterborough Phantoms 4-1.

MK Lightning won 6-4 at Swindon Lightning, and they followed up with victory by the same scoreline in the reverse fixture. Bracknell Bees won 4-2 at Sheffield and the Steeldogs ended a miserable weekend with a 4-1 defeat at Peterborough.

Elite League leaders Belfast Giants won 2-1 at Cardiff Devils, but Jonathan Phillips’ winner condemned them to a 2-1 loss at Sheffield Steelers. Rob Sirianni scored twice in Steelers’ 4-1 win at Fife. The Flyers moved off the foot of the table with a 4-3 win at Edinburgh Capitals. Nikita Kashirsky hit the winner for Dundee Stars in their 5-4 shoot-out success at Hull Stingrays. Braehead Clan won 3-2 after a shoot-out at Edinburgh.

In the Challenge Cup Cardiff won 5-3 at Coventry Blaze and 4-0 in the return on home ice, while Dundee beat Braehead 2-1.

Nottingham Panthers beat Vitoria (Spain), The Hague (Netherlands) and Riga (Latvia) to progress to the next round of the Continental Cup. They now face HC Asiago (Italy), Neftekamsk (Russia) and Yertis Pavlodar (Kazakhstan) in Group D of the competition.