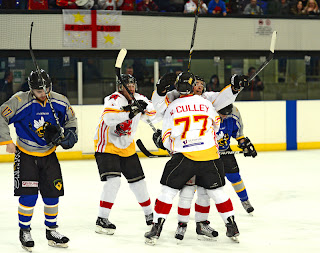 Billingham Stars will face Blackburn Hawks in the NIHL1 North play-off final. They edged through after a 5-4 second-leg win over Sutton Sting completed a 7-5 aggregate success.

Jamie Spurr and Simon Offord brought Sting back into things, but Cal Davies soon made it 6-4 on aggregate. Sting refused to lie down and Shaun Ashton reduced the margin to one to complete a hectic first period.

Both teams tightened things up in a scoreless middle period, but Stars put the game beyond doubt with under ten minutes remaining as captain Paul Windridge gleefully fired home. The final is scheduled to take place over the weekend of 4/5 May.

Coventry Blaze retained their NIHL1 North status with a 9-4 aggregate victory over Deeside Dragons. Blaze secured a 4-3 win at Deeside, and completed the job in style with a 5-1 success on home ice – Adam Alfoldy hit a hat-trick.

Chelmsford Chieftains claimed the NIHL1 South play-off crown with a 7-6 aggregate win over Wightlink Raiders. Two goals by Ross Brears helped Chieftains to a 4-3 victory on the Isle of Wight, while Julius Sinkovic scored a couple in a 3-3 draw in the return.