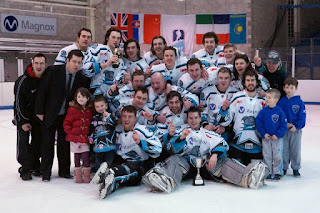 Solway Sharks (left) claimed the first silverware of the NIHL North season on Saturday, with a 9-4 aggregate win over Billingham Stars in KD Welding Specialists East/West Trophy final. Sharks held a 3-1 lead after the first leg and ran out 6-3 winners on home ice – Nathan Salem & Adam Reynolds both scored twice.

Sharks completed a successful weekend by keeping their NIHL1 North title bid on track with a 3-0 win at Sutton Sting. Stars stay second after beating Whitley Warriors 3-2 – Karl Culley grabbed the winner. Despite the defeat, Sting are up to third after a 9-4 win at Coventry Blaze – Ryan Johnson hit a hat-trick for the visitors. Sheffield Spartans beat Telford Titans 4-3 – Ollie Barron (2) led Spartans’ scoring – but Titans gained revenge in the reverse fixture with a 3-1 victory – Karol Jets scored twice.

Nottingham Lions boosted their NIHL2 North title hopes with an 8-3 win over Solihull Barons – Lions’ Joe Wightman hit a hat-trick. Sheffield Senators stay in the promotion hunt after a 9-2 win at Blackburn Eagles, while Deeside kept their challenge alive with a 6-3 success at Fylde Flyers – James Parsons & Steve Fellows both scored twice for the Dragons.

Basingstoke Bison moved back to the top of the EPL after a pair of wins over Peterborough Phantoms. Greg Owen’s hat-trick helped Bison to a 5-1 success on home ice and they followed up with a 5-2 victory in the return – Joe Miller (2) & Nicky Watt (2) led the scoring. Guildford Flames drop to second after a mixed weekend, losing 2-1 at MK Lightning before recovering to see off Telford Tigers 7-4.

Manchester Phoenix lost 2-0 at home to Bracknell Bees but bounced back to win the reverse fixture 3-1. Lubomir Korhon hit a hat-trick as Sheffield Steeldogs beat Telford 6-4, and they completed a four-point weekend with a 3-2 home win over MK Lightning. Slough lost 4-2 at home to Swindon Wildcats, but the Jets gained revenge in the return to win 5-4 – Frantisek Bakrlik (2) & Darius Pliskauskas (2) led Jets’ scoring. Bakrlik bagged another brace as Jets beat Bison 3-2 in the first leg of the EPL Cup Semi-final.

Elite League leaders Nottingham Panthers enjoyed a four-point weekend, beating Coventry Blaze 8-3 – David Clarke hit a hat-trick – before following up with a 4-2 win at Cardiff Devils. Belfast Giants slipped to a shock 6-2 defeat at home to Braehead Clan, but bounced back to down Edinburgh Capitals 5-0. Sheffield Steelers stay in touch following a 5-4 win at home to Cardiff and a 3-2 overtime victory at Edinburgh. Davide Nicoletti hit a hat-trick as Braehead Clan won 4-2 at Dundee Stars. Hull Stingrays beat Fife 5-2 – Sylvain Cloutier scored a couple – but the Flyers gained revenge on home ice with a comfortable 5-1 success.

In the Challenge Cup Quarter-final first leg, Nottingham won 3-2 at Fife – David Ling got the winner. Mike Wirll scored twice to help Dundee to a 4-2 home win over Sheffield, while Coventry and Braehead drew 2-2.