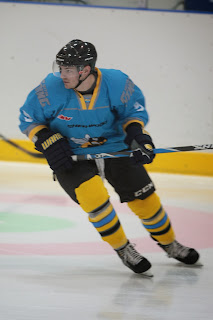 Billingham Stars maintained their lead at the top of NIHL1 North (Moralee Conference) with a 2-1 win over Blackburn Hawks – James Moss scored the winner. The defeat completed a miserable weekend for the Hawks who also slumped to a 6-3 loss at home to Sutton – imports Thomas Stuart-Dant (left) & Vjaceslavs Movko were amongst Sting’s scorers.

Whitley Warriors blew a 5-2 lead to draw 5-5 at Sutton, while Lukas Zeman hit a hat-trick in Manchester Minotaurs’ 6-5 win against Sheffield Spartans. Solway Sharks moved to the top of the table in the KD Flavell & Sons Northern Cup with a 2-0 win over Billingham.

Wightlink Raiders moved level on points with Chelmsford Chieftains at the top of NIHL1 South after an 11-1 win at Bracknell Hornets. Arran Strawson scored two seconds from time to seal a 7-6 success for Invicta Dynamos against Solent & Gosport Devils. London Raiders drew 3-3 with MK Thunder. In the NIHL South Cup Chelmsford won 9-4 at Streatham Redskins, but followed up with a 6-1 defeat at home to Invicta.

Manchester still lead the EPL after a mixed weekend. Kamil Tvrdek grabbed the shoot-out winner as Phoenix fell to a 3-2 loss at Bracknell Bees, but they gained their revenge in the reverse fixture after another shoot-out – Robert Schnabel securing a 3-2 success. Basingtoke Bison lost 5-4 after a shoot-out at Sheffield Steeldogs, but they bounced back with a 7-5 win at Slough Jets – Joe Rand scored four. Bison ended the week with a 5-1 victory over Guildford Flames.

Sheffield picked up two more victories winning 4-2 at MK Lightning, while Tim Smith’s overtime strike secured a 4-3 success at home to Peterborough Phantoms. Swindon Wildcats lost 8-6 at Peterborough, while Telford Tigers slipped to an 8-3 loss at Guildford and a 6-2 reverse at home to Lightning.

Elite League leaders Belfast Giants won 4-3 at home to Nottingham, while Panthers also lost 5-4 after a shoot-out at home to Coventry Blaze. Sheffield Steelers lost 3-2 at home to Fife Flyers and by the same scoreline at Coventry – Ryan Ginand hit the shoot-out winner. Fife won 4-3 after another shoot-out at Cardiff Devils – Tim Hartung got the winner.

Hull won 4-3 at Edinburgh Capitals and 5-2 in the reverse fixture, while Braehead Clan won 6-2 at Dundee Stars. In the Challenge Cup Belfast won 5-2 at Braehead.