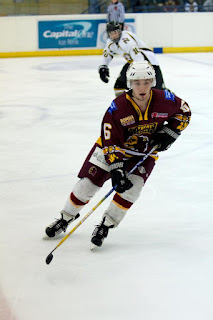 Solway Sharks extended their unbeaten NIHL1 North run to 18 games with a pair of draws. Sharks twice came from behind to tie 2-2 at home to Sutton Sting, and they followed up with a 3-3 draw at Billingham Stars – Nathan Salem (2) & John Connolly scored for Sharks, while Michael Bowman (2) & Ross Hanlon replied for the hosts. Jamie Pattison’s late winner kept Stars in the title hunt as they won 4-3 at Telford Titans.

Sutton boosted their play-off hopes with a 6-3 win at home to Telford – Richie Oliver (2) & Chris Sykes (2) led their scoring. Whitley slumped to a 6-4 loss at Trafford – Joe Greaves hit a hat-trick for Metros – but Warriors bounced back to beat Blackburn Hawks 5-4 – Callum Watson (left) hit the winner with just 10 seconds left. Myles Dacres scored three in Hawks’ 10-4 win over Coventry and Blaze completed a miserable weekend losing 4-2 at Sheffield Spartans.

Basingstoke Bison still lead the EPL despite a mixed week of results. Nicky Watt’s hat-trick helped them to a 6-2 win at Telford Tigers and they followed up with a 4-0 success over Bracknell Bees. However, Tigers gained revenge on home ice with a 3-1 victory, to keep Bison just three points clear of the chasing pack. Guildford Flames are second after a 5-3 win at Sheffield Steeldogs, but they missed the chance to close the gap on Bison with a 2-1 defeat at home to MK Lightning.

Manchester Phoenix also suffered an up and down weekend – crashing 6-1 at Swindon Wildcats, before bouncing back with a 7-3 win at home to Slough. The Jets also slumped to a 4-3 loss at home to Telford, Juraj Senko got the winner. Ondrej Lauko scored twice as Peterborough Phantoms came from behind to win 3-2 at MK Lightning, while Maris Ziedins repeated the feat in their 5-3 home win over Sheffield. James Galazzi grabbed a late winner as Bracknell beat Swindon 5-4. In the EPL Cup Semi-final first leg, Guildford beat Manchester 6-4.

Nottingham Panthers’ lead at the top of Elite League is down to two points after they lost to Sheffield Steelers. Panthers entered the clash on the back of a 6-2 win at Coventry Blaze – Bruce Graham hit a hat-trick – while Steelers narrowly edged past Braehead Clan 5-4, but the Sheffield outfit kept alive their own title hopes with a 5-2 win over their close rivals. Belfast Giants enjoyed a four point weekend with a 5-4 win over Hull Stingrays and a 4-3 shoot-out success at Cardiff Devils.

Stuart MacRae’s winner gave Devils a 4-3 overtime win at home to Coventry, but Blaze recovered in style with a 7-2 win at Hull. Jereme Tendler’s fourth of the night gave Hull a 4-3 overtime victory over Edinburgh, and the Capitals also fell 7-1 at Fife Flyers. However, two goals from Richard Hartmann ensured they didn’t end the week empty handed as they downed Braehead 5-2. Mike Wirll scored twice as Dundee Stars beat Fife 4-1.