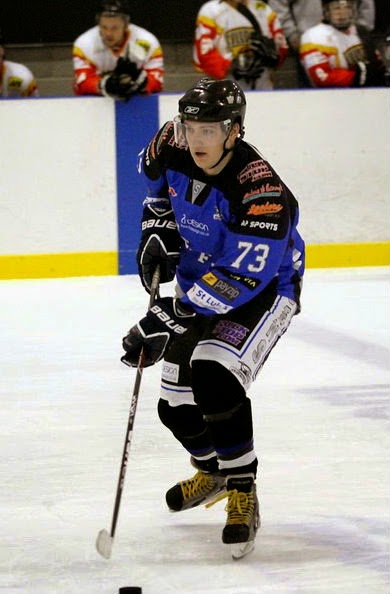 Spartans led 4-3 going into the final minute, but Adam Brittle’s late strike sealed a point for the hosts.

Adam Reynolds scored on his return for Whitley Warriors as they ran out 5-3 winners at home to Solway Sharks. Billingham Stars lost by the odd goal in nine at Solway, while Sutton Sting won 9-6 at Manchester Minotaurs.

Sheffield Senators boosted their Laidler D2 promotion hopes with a pair of victories against Blackburn Eagles. Tom Humphries (left) scored two in their 7-4 road success and he bagged another four as they triumphed 7-2 on home ice.

Telford Tigers NIHL won 2-0 at home to Widnes Wild, but they couldn’t add a second success as they blew a two goal lead to draw 4-4 at Hull Jets. Kieran Beach scored three for Hull in their 7-4 victory at Bradford Bulldogs. Nottingham Lions won 7-1 at home to Deeside Dragons.

Invicta Dynamos still lead NIHL1 South after a 9-0 win at home to London Raiders. Callum Best hit a hat-trick for Streatham as they won 6-5 at Cardiff NIHL1 and Redskins made it a four-point weekend with a 6-1 home success against Bracknell Hornets.

Alex Barker (3) led the scoring for Wightlink Raiders in their 10-4 victory at Oxford City Stars. Solent Devils slipped to a 6-5 loss at Bracknell, but picked up two points with a 4-0 home success against Cardiff. MK Thunder won 3-2 at London.

Wightlink won 3-1 at home to Chelmsford Chieftains in the D1 Cup. Invicta fell 10-2 at MK Lightning in the British Challenge Cup and Chelmsford lost 6-2 at home to Swindon Wildcats.

In NIHL2S, Chelmsford Warriors won 6-1 at Invicta Mustangs and Peterborough Islanders cruised to a 6-0 success at Haringey Racers.

EPL leaders Telford Tigers won 3-2 at Sheffield Steeldogs, but failed to follow up as they lost 3-2 after a shoot-out at Basingstoke Bison and 5-4 at home to Peterborough Phantoms.

Guildford Flames won 5-2 on home ice against Bracknell Bees and 3-1 at Swindon Wildcats, but ended the week with a 3-2 defeat after a shoot-out at home to Sheffield. Jan Kostal’s overtime strike sealed a 3-2 home win for Swindon against Basingstoke.

Manchester Phoenix lost 4-3 after overtime at Sheffield, but bounced back on home ice to win by the same scoreline after a shoot-out against Basingstoke. Bracknell lost 4-0 at Peterborough, but recovered to win 4-3 at home to MK Lightning.

Braehead Clan moved back to the top of the Elite League after trio of victories. Clan won 4-2 at Fife Flyers, 2-1 at home to Dundee Stars and 5-0 at Edinburgh Capitals. Belfast Giants enjoyed three home victories, beating Dundee 9-3 and Sheffield Steelers 5-3 & 6-3.

Nottingham Panthers picked up two home wins, defeating Coventry Blaze 3-2 and Edinburgh 6-1, but they found Blaze a tougher proposition at the Sky Dome as the hosts secured a 2-1 success after a shoot-out. Stephen Gunn & Danny Stewart got the goals as Fife won 2-0 at Edinburgh.

Cardiff Devils continued their excellent recent form, winning 7-0 at home to Hull Stingrays and 8-5 against Fife. They also picked up a 3-2 victory at Hull in the Elite Challenge Cup.