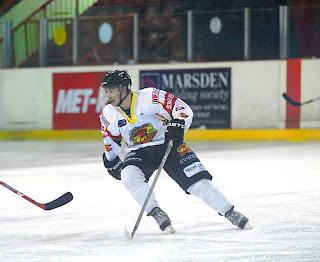 Basingstoke Bison moved to the top of the EPL after a four-point weekend. Joe Miller (2) & Doug Sheppard (2) led the scoring as Bison beat Slough Jets 6-2, and they followed up with a 2-1 shoot-out success in the reverse fixture – Jaroslav Cesky got the winner. Manchester Phoenix picked up a point in a 5-4 shoot-out loss at Peterborough Phantoms, but bounced back in style to beat Sheffield Steeldogs 9-1 – Joachim Flaten (2) & Ciaran Long (2) were amongst the goals.

Bracknell Bees won 5-3 at Telford Tigers and completed an excellent weekend with a 4-3 win at home to Guildford Flames – Lukas Smital got the winner. Aaron Nell scored three as Swindon won 5-4 at Guildford, but the Wildcats also suffered a pair of losses to MK Lightning – 6-3 on home ice and 3-0 in the return. Peterborough Phantoms lost 4-2 at Sheffield, but recovered to beat Telford 7-2 – Luke Ferrara hit a hat-trick.

Belfast Giants had a mixed week in the Elite League. Two goals from Robby Sandrock helped them to a 5-1 win at home to Fife Flyers, but they fell 5-4 in overtime at Coventry Blaze – Brad Leeb got the winner. Giants gained revenge over Blaze on Sunday with an 8-5 victory – David Phillips & Noah Clarke both scored twice. Nottingham Panthers beat Edinburgh Capitals 10-0 and followed up with a 5-4 overtime success against Braehead Clan – Bruce Graham got the winner.

Paul Bissonette scored on his debut for Cardiff as the Devils won 7-5 at Braehead, but the Welsh outfit failed to follow up at Edinburgh losing 4-2. Sheffield Steelers won 4-3 after overtime at Dundee Stars – Tylor Michel got the winner. Fife Flyers beat Edinburgh 2-1, but lost 3-2 at Hull Stingrays. In the Challenge Cup Sheffield beat Coventry 7-2 – Colin Shields scored three – and won 4-3 at home to Nottingham – Tom Sestito got the overtime winner. Cardiff fell 4-3 at home to Hull.