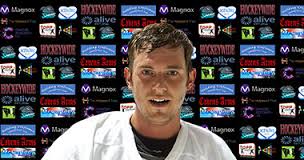 Solway Sharks began the defence of their NIHL North title with a 3-2 win at home to Billingham Stars – Iain Bowie (left) got the winner.

Michael Bowman hit a hat-trick for Stars as they bounced back with a 15-1 victory against Telford. The defeat completed a miserable weekend for the Titans as they also fell 6-1 at home to Whitley Warriors – Adam Reynolds scored three. Manchester Minotaurs won 9-8 at Sutton Sting – Lukas Zeman (4) & Joe Greaves (3) led their scoring, with Thomas Stuart-Dant grabbing five for Sting.

Nottingham Panthers began their Elite League title defence with a 9-3 win over Hull. The Stingrays recovered in style to beat Braehead Clan 5-2. Belfast Giants defeated Edinburgh Capitals 5-0 and Cardiff 7-2, though the Devils got points on the board with a 5-2 win at Fife Flyers. Dundee Stars started their season strongly with a 2-1 win at Braehead and a 3-1 success at home to Coventry Blaze.

In the Challenge Cup Sheffield Steelers won 4-2 at Coventry, but slumped 4-1 at home to the Panthers. Fife won 2-1 at Edinburgh.

EPL champions Guildford Flames lost their first pre-season game 2-1 at Basingstoke Bison, but bounced back with victory by the same score in the return game. Manchester Phoenix lost 5-2 at Sheffield Steeldogs, before recovering to win 4-3 back on home ice. Swindon Wildcats enjoyed a trio of wins beating Slough Jets 4-2 and Telford Tigers 6-3 & 3-2. Jets beat Bracknell 8-1, but Bees regained some pride with a 2-1 victory in the reverse fixture. Peterborough Phantoms beat Invicta Dynamos 7-4 & 7-2, while MK Lightning won 6-2 at Chelmsford Chieftains.