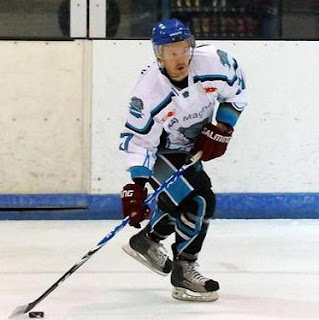 Solway Sharks maintained their lead at the top of NIHL1 North with a 7-1 win at home to Whitley Warriors – John Connolly (left) scored twice. Billingham Stars won 5-1 at Whitley to stay three points behind Sharks – Michael Bowman was amongst the goals again.

Coventry Blaze had a mixed weekend, beating Sheffield Spartans 5-2 but losing 5-4 at Blackburn – Jared Owen (2) led Hawks’ scoring. Telford Titans moved off the foot of the table with a 4-2 win at home to Trafford Metros. NIHL2 North leaders Nottingham Lions came from behind to win 2-1 at Solihull Barons – Luke Branin got the winner.

Romford Raiders are the new leaders of NIHL1 South. Four goals from Juraj Huska helped them to an 11-2 win over Solent & Gosport Devils and they followed up with an 8-4 win at Invicta Dynamos – Shaun Yardley hit a hat-trick. Jakub Klima scored four as Streatham Redskins beat Chelmsford 6-5, but the Chieftains bounced back with a 6-2 win at home to Cardiff Devils – Julius Sinkovic bagged a brace. In the NIHL South Cup, Wightlink Raiders won 10-2 at Slough Jets – Joe Denness scored five.

Basingstoke Bison still lead the EPL after a 5-3 win at home to Peterborough Phantoms – Doug Sheppard scored a couple. Guildford Flames are up to second after a trio of road wins. They won 4-1 at Telford Tigers, 5-1 at MK Lightning and 5-3 at Peterborough – Curtis Huppe scored in all three games. Manchester Phoenix enjoyed a four-point weekend, winning 5-3 at Bracknell Bees and 2-0 at home to Lightning.

Kavil Tvrdek scored twice as Lightning won 3-1 at Slough, but the Jets hit back with two wins over Telford – 8-2 at home and a 3-2 shoot-out win on the road. Aaron Nell hit a pair as Swindon won 5-0 at Sheffield Steeldogs and repeated the feat as the Wildcats won 4-2 in the reverse fixture. Sheffield completed a miserable week with a 5-1 loss at home to Bracknell – Martin Masa scored twice.

Nottingham Panthers are the new leaders of the Elite League. Two goals from Matthew Myers helped them to a 4-3 win at home to Coventry Blaze, while Matt Francis hit the shoot-out winner as they edged past Cardiff Devils 3-2. Their third success of the week came back on home ice as they defeated Hull Stingrays 8-4.

Belfast Giants slumped to a shock 4-1 loss at Fife Flyers – Jason Pitton hit a hat-trick – but recovered to win 4-1 at Edinburgh Capitals. Sheffield Steelers also crashed to a surprise defeat – 2-1 at home to Edinburgh. Drew Miller scored four as Braehead beat Fife 5-3, but the Clan couldn’t follow up as they fell 4-1 at Dundee Stars – Billy Bagron scored twice.