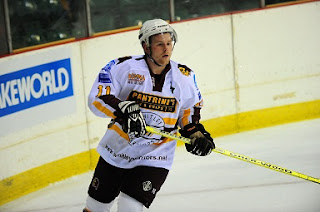 Whitley Warriors’ Shaun Kippin looks set to leave Hillheads. The gritty forward is believed to be relocating to the North West and it’s thought Blackburn Hawks are keen to add him to their roster. However, they face stiff competition from ambitious Deeside Dragons and Coast to Coast understands the Division Two outfit are Kippin’s most likely destination.

Hawks have confirmed Dave Meikle has agreed another year with the club and are believed to be interested in signing Sean Day once again. Day left Blackburn midway through last season to join Trafford Metros, but is considering a return to the Hawks. Former Telford Tigers forward Dan MacKriel could also be on his way to Blackburn.

Solway defenseman Aaron Greger has agreed another season with the Sharks, while NIHL1 North champions Billingham Stars have confirmed Jamie Pattison and Anthony Price will be back. Sheffield Spartans have signed forward Scott Morris from the EPL’s Sheffield Steeldogs, but Ryan Handisides is leaving Yorkshire and is understood to have agreed a move to a NIHL1 South team. Netminder Richard Griffiths has been released by Nottingham Lions.