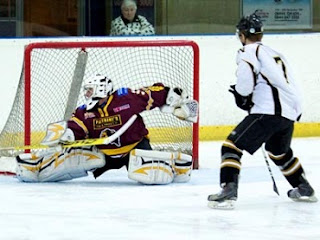 Whitley Warriors have made their first three signings of the summer as they look to reclaim their NIHL1 North crown from Billingham Stars. Coach Garry Dowd has confirmed forward Jamie Tinsley and netminder Richie Lawson (left) have agreed another season at Hillheads, while Lawson’s younger brother Alex has made the switch from Stars. Warriors are also believed to be interested in Bracknell Bees forward Michael Bowman, who’s expected to move back to his native North East. Bowman enjoyed a number of productive seasons in the EPL with Bracknell and Slough Jets and it’s expected competition for his signature will be fierce, with Stars and Solway Sharks also thought to be keen to acquire his services.
Sheffield Spartans have confirmed forward Jon Woolhouse as their Assistant Player/Coach for a second season. Trafford Metros’ hopes of improving on last season’s fifth placed finish have been dealt a blow with the loss of Jake Nurse to the EPL’s Manchester Phoenix.
Ambitious Deeside Dragons remain hopeful of enticing Chris Jones back to North Wales to boost their NIHL2 promotion bid. Blackburn Hawks forward Tom King and defenders Chad Briggs and Ollie Lomax are others on Coach Steve Fellows’ wish list, though Lomax has already stated his desire to remain with his hometown club. Ex-Hawk Brian Worrall is another under consideration.
Nottingham Lions have welcomed back long serving forward Joe Wightman and captain Nick Whyatt as they bid to return to Division One at the first time of asking. Solihull Barons’ Canadian defenseman Mike Rodger has returned for a second season at Hobs Moat Road.
NIHL2 South champions Romford Raiders have secured the services of Slovakian forward Juraj Huska for a third season. Huska notched an impressive 41 goals and 51 assists last time around and Raiders will hope he produces similar figures next season. Chelmsford Chieftains’ have signed Alex Green and Michael Ranby once again and are expected to announce the signing of two new imports in the coming weeks.
(Image permission: John Knowles)