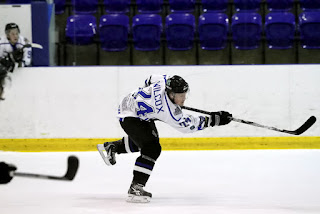 Sheffield Spartans have confirmed player/coach Chris Wilcox has agreed to return for season 2012/13. Wilcox (left) endured a difficult first year, as Spartans flirted with relegation for much of the campaign, but is hopeful of better luck this time around.

“I’m very excited about next season already,” said Wilcox. “There are a few exciting potential additions to last season’s roster and I really hope this season we’ll push for a play-off spot. I believe we had the potential last year to be a top four team, but for a few reasons it wasn’t to be. I hope to rectify that this season.”

Champions Billingham Stars have announced their first signing of the summer with the return of influential defenseman Ben Davison. Stars are also believed to be interested in Manchester Phoenix forward Stephen Wallace, though face competition from a number of other NIHL teams.

Deeside Dragons’ efforts to build a promotion winning team have been boosted by the return of last season’s top scorer, James Parsons. The forward grabbed 42 goals with 21 assists last term and will be hopeful of increasing that tally during the new campaign.

Nottingham Lions’ bid to return to Division 1 has been boosted by the news netminders Dan Green and Sam Gospel will be joining the club on a two-way deal with Nottingham Panthers. Solihull are searching for a new goalie after Sam Hewitt confirmed he was leaving the Barons.