The recent World Championships in Slovakia showed us how important getting three points can be when it comes to achieve whatever objectives you have.

So, it got us thinking in BIH Towers, how would getting three points for a win in regulation time affect the Elite League going back the last five years?

As it stands of course, it’s two points for a win, either in regulation time or in overtime or penalty shots and one if you lose after 60 minutes.

But, as you’ll see, how the play-offs could have been shaped would be affected, plus in one season, the title could have gone elsewhere.

Starting last season, Cardiff Devils and Belfast Giants were tied at 92 points, with the Giants edging the title by virtue of regulation time wins.

However, that extra win in 60 minutes would have saw them take the title by a point in what would have been another fraught weekend.

Glasgow Clan’s late season run of form saw them drop to fourth with Nottingham Panthers taking advantage, but with five more wins in reg time, Pete Russell’s side would have finished third and set up a play-off clash with Sheffield Steelers instead of Guildford Flames.

Steelers would have been above Flyers in the final standings while Manchester Storm, although would have still missed the top eight, would have got to within a point of Coventry Blaze instead of being three points adrift.

Four of the top five places would have switched in a three-points system and while Cardiff Devils would be more than comfortably ahead, Manchester Storm would have finished third rather than second.

Adam Keefe, in his first season as Belfast Giants coach, would have been fourth, four points ahead of Nottingham Panthers after claiming five more wins in the 60 than Corey Neilson in his final season.

For the play-off places, Braehead Clan, as they were, could have had a ‘sliding doors’ moment and scraped into the play-offs instead of Coventry Blaze, with 24 reg time wins to 22.  Of course, had this been the case, John Tripp, who left the club after this failure, could have still been in a job.

This was the last season where the Conference winners were given preferential seedings, which would have changed the complexion on the play-off ties that took place.

In the play-offs, Steelers would have lined up to play Fife instead of their old pals, Nottingham, who would have been off to Northern Ireland to play Belfast.

Unfortunately, this is the only season where nothing changes in terms of where the teams ended up and it was a case of as you were for the ten teams who took part in this season.

Braehead had the most regulation time wins with 28, compared to Sheffield and Cardiff’s 27 each and had they been able to turn some of those overtime or penalty losses into victories, it could very well have been a different story.

If you’re a Braehead fan, look away now as this is one of two seasons in the last ten years where the title would have gone elsewhere under a three-point system.

Clan, under Ryan Finnerty, were pipped to the title by a point by Sheffield Steelers, however three more victories in 60 minutes would have seen them take the title by two points.

The third team in that race, Cardiff, would have been a little more adrift, finishing five behind the champions instead of the two they did.

At the bottom end, Fife Flyers and Hull Stingrays would have traded places as the Kirkcaldy side would have edged Stingrays on reg wins. 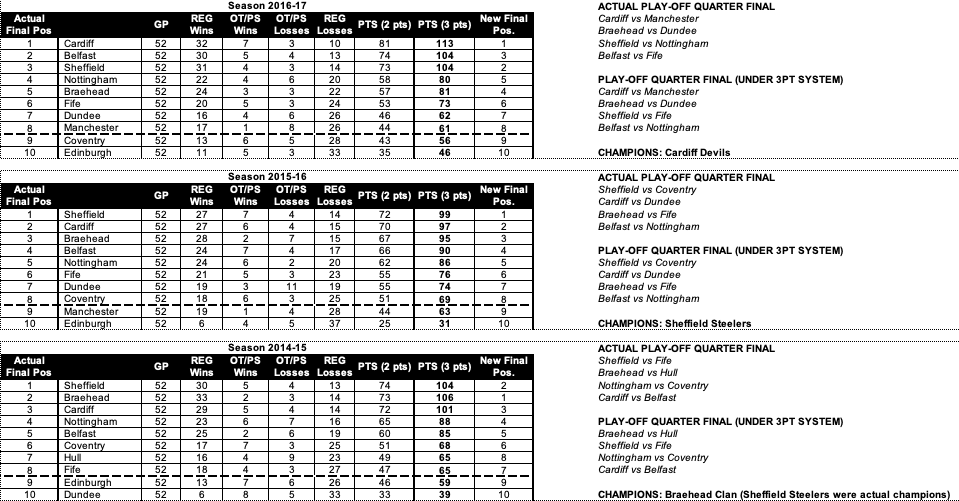 Manchester Storm have snapped up Adam Harding from the EPL’s Swindon Wildcats. The former Great Britain U18 and U20 player scored 10 goals with 15 assists for the Wildcats last year. Player/Coach Omar Pacha said: [Read more…]

The Elite League are looking into allegations made by former Milton Keynes Lightning coach Doug McKay that he is owed thousands of pounds by the club after he left them in November. The story, broken [Read more…]