THE SEASON THAT WAS

From a Phantoms fans perspective, last season couldn’t have gone much better.

If you’d offered us one trophy at the start of the year, we would’ve snapped your hand off so to walk away with three trophies, second in the league and an appearance in the NIHL Final Four Grand Final, it was definitely a very good year to be a Phantoms fan.

Whilst there was definitely disappointment that we didn’t win the league, Swindon put together an unstoppable run in the second half of the season and in the end, in my opinion, deserved to win the league.

The Autumn Cup success against Sheffield was a great way to start. We didn’t play well in Sheffield, but the performance on home ice was much better and I thought we fully deserved to lift the cup.

The South Cup win was probably the highlight for me, though. Games between the Phantoms and Bison are always tight and the tie was close for the whole 120 minutes across the two games.

In terms of atmosphere during the second leg, it was one of the best I can recall in recent years.

The fans were brilliant and the players stepped up and got the job done. 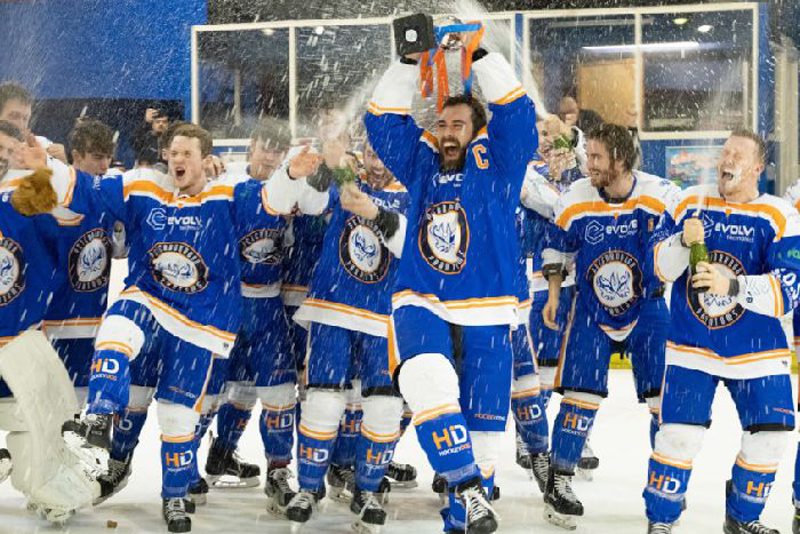 After winning the South Playoffs against Bracknell, the Final Four weekend was one of mixed emotions.

From such elation beating Sheffield on the Saturday, to the heartbreak of the overtime loss against Hull in the final.

The heartbreak suffered in Coventry didn’t dampen spirits too much, though, and we can still look back on what was an absolutely fantastic season.

The summer was one of the smoothest I think we’ve ever had. To re-sign all but one or two of last seasons team was a good move from Slava Koulikov.

Ales Padelek had initially decided to retire, but after the season he had last year, it was brilliant news to hear he was going to be continuing for at least another year.

After I initially wrote this, it was announced captain and legend James Ferrara would also be retiring at the conclusion of the season so it will make this season one to remember even more.

We’ve added Conor Pollard to the team and I assume he’ll slot straight into the position vacated by James White.

Conor is well known in Peterborough hockey and has been racking up the points for Phantoms 2 for a number of years, so it’ll be interesting to see him step up and see how he does in the first team.

I understand fans concerns that we haven’t signed anyone new to Peterborough hockey, but what we have is a group of players who have already been together for at least a year, know each other and have been successful together, and there’s no reason why they can’t do it again this season.

We also had the news over the summer that coach Koulikov had signed a new deal to keep him in Peterborough for an extra two years.

This is arguably the best bit of business we have done in the close season. Slava has brought his style and knowledge to the team and we’ve been much more successful with him than we had been prior to his arrival.

Knowing he’ll be remaining with us is a big boost as we know we can be successful with him in charge.

I think the Phantoms can go into the new season with excitement and really just give it a good go once again.

The group of guys coming back to our locker room have just had a brilliant year together and we’re hopeful they can repeat that.

We, as fans, are under no illusion that this campaign will be tougher than the last one now we’ll be facing top teams week in, week out, but the Phantoms generally fared quite well against the teams we’ll be comping up against this year.

Everyone’s in the game to win trophies and if the Phantoms could put another one in the cabinet this year, it would be brilliant.

Despite last seasons success, there’s not necessarily an expectance that we’ll win more cups this year, but the hope and optimism is certainly there that we’ll be competing at the top of the league and in the cups once again.

We have a good blend of youth and experience and it will be good to see the younger guys progress with the help of the older heads.

The younger guys stepped up in the big games last year and I think we’ll be in for another good season if they continue their development at the rate they all have been, backing up the experienced guys who we all know can put up the points required to be successful.

I think the “first line” will remain as James Ferrara, Glenn Billing and Ales Padelek. However, I think the second line of Martins Susters, Corey McEwen and Petr Stepanek could collect the most points across the season if they click and find the form they showed in spells last season.

Panther Tetlow to get ice time with Peterborough Phantoms

Telford Tigers maintained their six-point lead at the top of the EPL despite enduring a mixed weekend. The Tigers lost 6-2 at Basingstoke Bison, but bounced back to win 5-4 at home to Sheffield Steeldogs [Read more…]